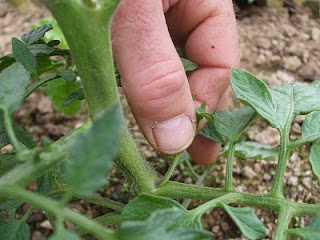 After planting into your growing medium, you will find that your plants will soon put on a growing spurt if the conditions are right.
Now is the time to check your plants weekly for the small side shoots that appear, nipping them out with your fingers is the easiest way, only later in the season when you have larger shoots, should you use a knife.
Be very careful at the top of the plant that you do not mistake a shoot for the growing tip. If in doubt, leave it for a few days. Only bush type tomatoes require you to leave the shoots on and nip out the head at a later stage.
Shoots will produce trusess of tomatoes, but they will be weaker, and be detrimental to the trusses on the main stem, you will also end up with a leggy growing head of your plant. If you notice any damaged leaves at the base of the plant then these can also be removed. But you need at least 4 or 5 leaves below the truss to aid fruit production, so dont be over zealous.
Here is a small video of removing side shoots

Well there has been a lot of post on the grow your own forum this year about taking shoots off the plants for cuttings. One of the members of the forum  has allowed me to show you how she did it, and I will try to keep up with the progress of her cuttings. In fact I might do a few myself.


Taking Tomato Cuttings courtesy of  Down on the Allotment Blog 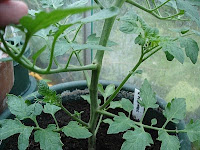 Just three of my tomato plants were safe in the greenhouse when all the rest were badly frosted a couple of weeks ago. You can see here there are some nice side shoots which I have left to take as cuttings. I don't want to leave them to get too much bigger because that will sap the strength from the parent plant. 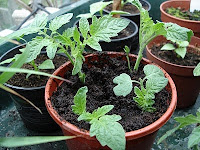 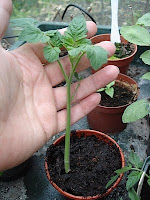 So as gently as possible, and trying to avoid the delicate hairs on the stem I broke them off at the base.
Taking off any larger leaves which will stress the seedling, dibbed a hole in some potting compost and planted them as deep as they would go. The new roots will grow from the base and from the hairs on the stem, so I want them to get as good a start in life as I can.  They might sulk for a couple of days, but some bottom heat and a moist atmosphere out of direct sunlight will get them on their way.
Nipping out early shoots and taking cuttings 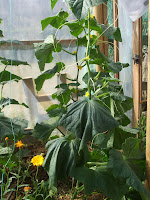