December 10, 2010
As you might have read, I have  to prepare the evening meals on Thursdays. So as Mrs TK was out for most of the day, I had a good chance to go through her numerous cook books. As she is a vegetarian, meat is out, but she adores sea food and fish. So the good old prawns were on the menu again, with some salmon as the main course. The prawn cocktail was made last week, so this week I thought I would try a warm starter.

How to make Chinese Fried Prawn
1. Shell, de-vein and wash prawns. Mix with corn flour and set aside for 10 minutes.
2. Heat oil and fry prawns for a few minutes till they just start to cooked. Remove and keep aside.
3. Heat some more oil in the same pan, fry the ginger for a few minutes, then add the chopped  peppers and spring onions. Fry for another minute add vinegar and Soya sauce.
4. Stir and add the salt and ajinomoto to taste. Add the cooked prawns and fry for two minutes. Remove and serve hot. 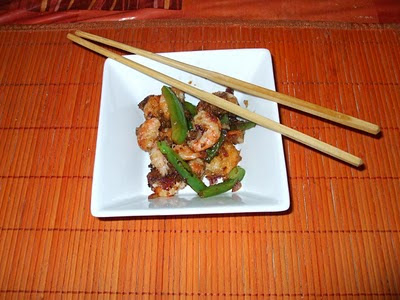 Now for the Salmon, where good old Gordon Ramsay came to my aid. Mrs TK thinks that if you can read a recipe you can cook, easy for her to say. But a picture does help, and it didn't look too complicated for my limited skills, which came from doing a term of catering in my last year at school, because I was so usless at woodwork or metal work, and I had decided I wanted to join the army catering corps when I left school.  Having gone to Switzerland at 16 to work as a kitchen porter for 6 months as a working holiday, it  put me off catering for life. The owner and the head chef of the hotel where I worked, made Gordon Ramsay look like a pussy cat.

Serves 4, so I just halved it, which was a mistake with the sauce, so I added some more cream and water later to give us a little more, the only trouble being  that it made it slight too thin, but still tasted lovely.

• Rub both sides of the fillets with 1 tbsp of the olive oil and set aside.
Mix together the cucumber, tomatoes, olive and parsley. Season well and set this salad aside.
• Make the sauce: halve the tomatoes and whiz with the vinegar, sugar and basil in a food processor. Pour through a sieve into a saucepan, rubbing with the back of a ladle. Cook, uncovered, for about 10 minutes until reduced by half. Mix in the cream and simmer for a minute or two, then whisk in the diced butter until nice and smooth. Season and set aside

• Divide the lettuces into leaves, discarding the core. Heat the remaining oil and sauté the leaves for about 2 minutes until wilted. Season and set aside.
• Heat a heavy-based non-stick frying pan and, when hot, add the salmon, skin-side down. Turn the heat to medium and cook for 3-4 minutes. Season the fish as it cooks. Turn over carefully and cook the other side for 2-3 minutes until the fish feels slightly springy. Season again.

• To serve, dress the salad with the vinaigrette and place in the centre of four dinner plates. In the restaurant we would mould it neatly in a scone cutter. Arrange the wilted lettuce on top and then the salmon. Serve the sauce around.


OK, this is how it should look. 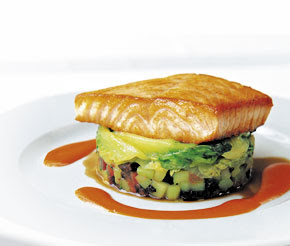 And this is my slightly less well presented version, firstly I was surprised how well the base held together in the mould. 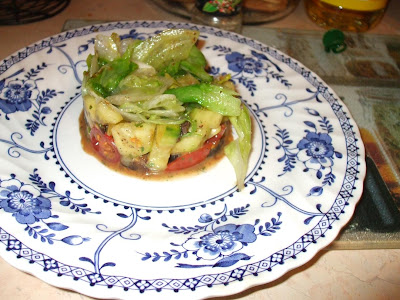 The sauce as I said was a little too thin, and as we had frozen, then defrosted the salmon that we had bought last week it was not as firm as I would have liked, so fell apart a little on cooking, which Mrs TK marked me down for, and has just told me that I should have left the skin on for cooking.
But she did say it tasted wonderful, or was that just because she wants me to cook again next week! 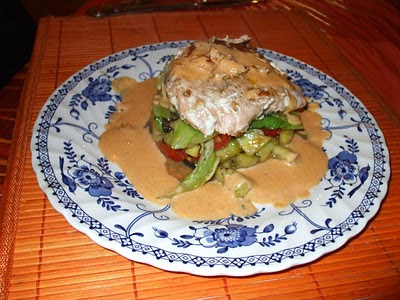