How big is your tractor

October 19, 2011
Well, it's that time of the year again, so we had a delivery of hay for the horses to munch on over winter. There is still plenty of grass in the fields, but it is past its best and they knew we had a delivery because they are always hanging around the gate near the stables! 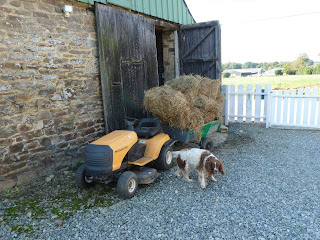 Earlier in the spring when there was too much grass, I had to cut a couple of acres with the ride on mower, which I am sure had the French farmer next door in stitches as he watched me for hours going up and down the fields. But I will get him back when my lottery win happens, as I am getting one of these just to cut the grass and nip up to the local bar for a few glasses of red, which is what a lot of French farmers seem to do on their fancy new tractors. 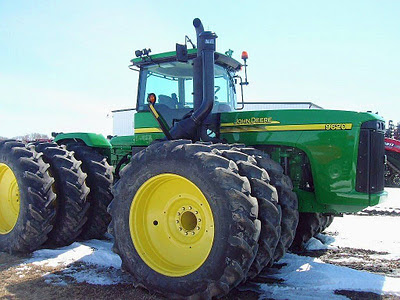 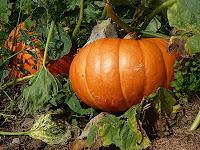 Of course, there can't be too many people living in France without pumpkins, but why the hell do we seem to grow so many?  After all there is only so much pumpkin soup that you can eat over winter, and it is not as if we will not have enough home-made tomato soup. Then again, Mrs TK is a vegetarian and does make some wonderful tasty vegetarian dishes, even for a carnivore like me.

While I am mentioning tasty food in France, we had a little treat this week at a local bar. OK for a change, it wasn't French food, but good old fish and chips. The venue was the 'yellow bar' in our village and Mandy's  mobile fish and chip bar had arranged to be there.

Naturally, I was well rewarded by Mandy for all the free 'plugs' that I am giving her, so as I will not be getting any more 'free' fish and chips I can tell you how good or bad they really were, which according to Mrs TK 'were superb' and some of the best she had tasted, of course.,there is no way I would not agree with her! Although she did also get the vegetarian option to the battered sausage, which was some very tasty pineapple fritters. 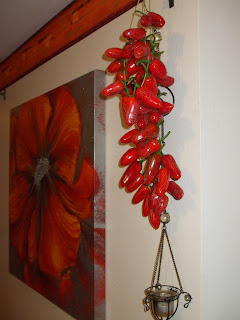 Now, it is not all just eating that we do here in France, there is a lot of hard work that goes in to preparation and storage for the winter. The task that I had been set  today was to string up some of the chillies that this season had provided us with a bumper crop of  in the poly-tunnel.

Not only will they provide us with some very hot dishes, but I think they make quite a nice feature in the house while they are drying out before Mrs TK works her magic with them.
Here is a link to her blog, which will show you what she has done in the past.

As I had no catgut handy, some thin strimmer cord did the trick to string them up on.

We still have plenty of tomatoes ripening in the poly-tunnel, but there is not a lot I can mention about growing tomatoes at this time of the year. Unfortunately, I did eventually get some blight ,but one spray of Bordeaux mix stopped it in its tracks and I just go around once a week cutting off any affected leaves, not that there are too many left.

I have saved a few seeds from the non hybrid varieties for next year and I just hope we do not get an early frost like last year, which would spoil the fruit still left on the plants. We have had a very mild Autumn so far, but this morning was quite nippy but we had a glorious clear, cloudless day which means colder nights.