How not to kill your tomato plants!


As Portugal is one of my favourite places in the world second to France of course, I could not refuse to give some advice to Piglet in Portugal about her poor tomatoes. I have added a link to her post, but it is also easier to post it here and add comments to save everyone switching back to her post.

HERE IS HER POST AND MY COMMENTS IN BLUE


How did I kill my tomato plants?
Posted on May 31, 2012 |
There’s certainly never a dull moment when you attempt to grow your own fruit and vegetables, especially on Piglet’s plot! One minute they are all fine and the next… 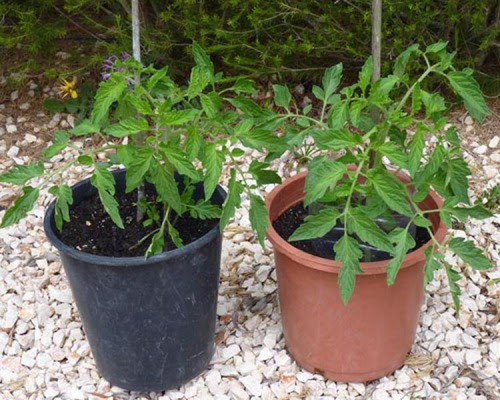 Tomato plants before feed
As the leaves get wider than the pot it is time to re-plant.

Luckily the photos easily helped me spot the problem, which is simply a case of lack of nutrients. There is a small amount of nutrients in compost which is why they started so healthily. However, this is soon washed out with watering, especially nitrogen which is mainly for growth, Also the roots soon fill the pot so there is nowhere for the nutrients to be stored when the plant is later fed.


Before we returned to France I went to our local plant and hardware shop to buy liquid fertilizer for my fruit and vegetables. After performing various charades on my part, and shoulder shrugging on the shop assistant’s, I finally made him understand “I need food for my vegetables – liquid “food” which I dilute”.  I carefully listed, in Portuguese, all my fruit and vegetables and he assured me an organic fertiliser called BrioSint was the correct product.
The shop assistant wrote down the dosage, one tampa per 10 litres of water, and I was all set.
I diluted the fertilizer as per his instructions and fed all my fruit and veg.  On my next visit to the same shop a few weeks later I double-checked I’d understood his instructions  with the shop assistant who could speak English. “No, I should not be watering the plants I should be spraying the leaves and I would soon have “muito grande lettuce, spinach. peppers, bom tomates etc”.
Mutter, mutter…mutter

Foliar plant food is fine for small house plants, but tomatoes need a lot of feeding. Also a lot is wasted when spraying the plants. Always use a liquid feed and water in, but do not try to make the dose stronger. It will not make your plants grow twice as fast, it will scorch the roots and could kill them.

I found a new spray bottle, made up the feed and sprayed the leaves as directed. I then went to France for a couple of weeks secure in the knowledge all my fruit and veg were fed and my friends would take care of the watering.
When I returned to Portugal the leaves on my tomato plants had turned yellow and were beginning to curl. The tomatoes were also a strange green. Perhaps they’d been over watered I thought? However, on closer inspection I noticed the veins on the tomato plant leaves were almost purple. I returned to the shop clutching the product and sample leaves.
Mutter, mutter…mutter
I struck lucky, the guy who spoke English served me. Yes, it was definitely the correct product and yes I did spray it on the leaves. However, he blamed the demise of my tomatoes on the cold. I accepted this and returned home.
Mutter, mutter…mutter 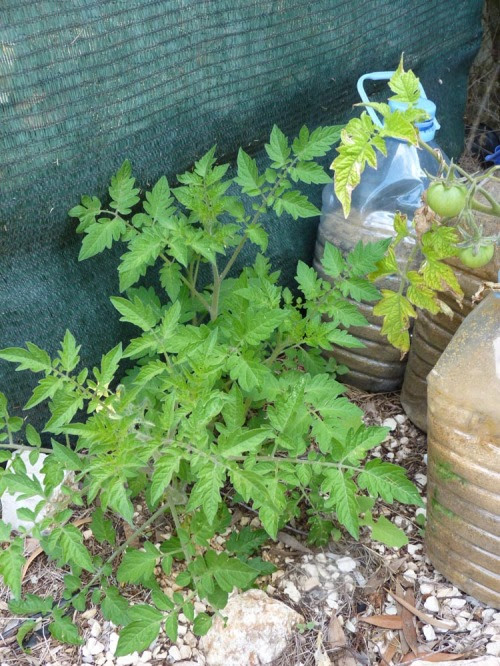 It was then I spotted a self-seeded tomato plant growing beside my compost heap which had escaped the fertiliser. It was perfectly healthy so the notion of it being too cold, was a red herring in my opinion.

As you can see this self seeded plant is growing happily in the soil. plants in good soil sometimes require less feeding than in compost as it is not washed out and there is plenty of reserve. However, feeding them will give you a better crop. 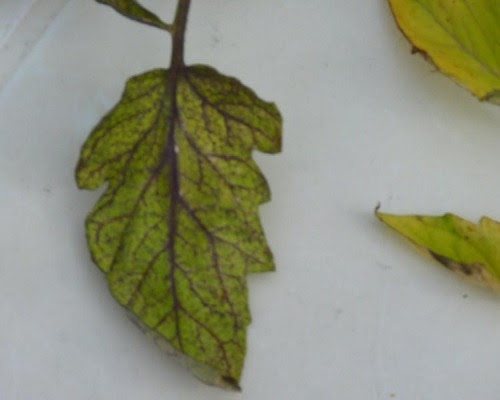 Now on a mission, I returned to the shop with more samples of dying tomato leaves, plus a healthy one to stress my point. Poor guy, you could almost see him groan when he saw me walk into the shop. After an hour queuing in sweltering heat, it was my turn to be served and I related the story, showed him the dying leaves and the a sample leaf from the healthy tomato plant. Exasperated, he shrugged his shoulders.
There’s definately something wrong, but what?


Yellow leaves mean lack of nitrogen and other trace elements

He was at a loss as to the problem. When I expressed my doubts as to spraying the leaves, he again confirmed this was correct. He asked if I’d sprayed them in sunlight? Maybe, I don’t know. He never mentioned this before!
The guy in the queue behind me came to my rescue, thought I’d probably over fertilized and advised me to water the plant in future rather than spray the leaves. It’s strange though, because the other plants I’d sprayed such as the peppers and strawberries were fine.


Spraying feed or pesticides in hot weather can cause leaf scorch, so he was on the right track. 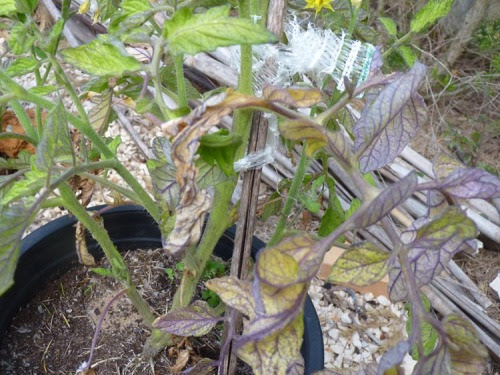 I returned home to watch and wait. Hopefully with no additional feed the problem would resolve itself. However, it was not to be.

The veins are tinged with purple and blue
The edges of the leaves started to turn blue so I decided to destroy all the tomato plants and start again.
Groan, curse…mutter, mutter…mutter!

I related my tale of woe to a friend who felt so sorry for me, he donated several of his tomato plants and seedlings. Bless him!

Did I kill my tomato plants? Any suggestions as to the cause gratefully received!

Your plants would have survived Piglet if you had replanted them into larger pots or better still, into the soil as it is a job to keep thirsty tomato plants watered in hot weather. Also as I have said with having to give them so much water the nitrogen will soon be washed out. Then you would have to feed at every watering as they do commercially when growing in peat bags.

I also noticed that you plant looks like a cordon type, i.e. the tomato trusses are best grown only on the stems and all side shoots should be removed. (see my previous post) Bush tomatoes give a quicker crop  nearly all at once, where as cordon ones give a crop throughout the season. Let me know the variety if you can and I will tell you what type of plant it is.

The great thing is that you can now go and give advice to the guy in the shop and you could become the next 'Tomato Queen.'

If anyone else requires some advice either send me pictures or post on your blog and let me know I will try my best to help.