March 21, 2010
CUCUMBERS
Treat the raising of cucumbers the same as tomatoes. But when planted out in the greenhouse, they do need a lot more space. I put two plants at the end gable of my greenhouse giving them 2.5 m each.
The secret for a bumper crop is to grow just a few cucumbers on the stem. When it reaches the top of the wire (6 ft ) nip out the head.
Take shoots from the stem, about 4 either side will be more than enough, and trim any others off. Tie a training string at the plant end of the shoot and spread out the strings into a fan shape. When each shoot has grown long enough i.e., when it is touching the plastic , then nip the head off.
OK, I know my drawing is not perfect, but it gives you a good idea of what I was trying to explain. 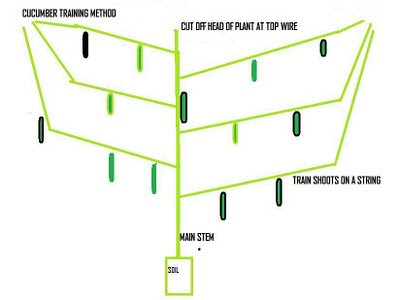 Cucumber F1 Bella is ideal for inside or outside 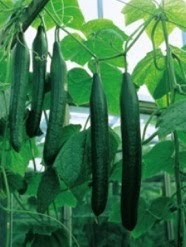 ‘Traditional’ types: These are the best cucumbers for the exhibitor, and still the better candidate for unheated greenhouses and polytunnels as they require a slightly lower temperature F1 hybrids. They bear fruit from side shoots, not the main stem, the top of which should be pinched out once it reaches the top of its support. Traditional types produce both male and female flowers that will produce bitter fruit if they are pollinated so the male flowers must be removed before they open, leaving only the unpollinated female flowers behind to develop fruit. Pinching out the male flowers really needs to be done on a daily basis. Selected varieties: ‘Telegraph’, dating back to 1897, and ‘Conqueror’ (1872).


F1 Hybrids: These have been developed to produce only female flowers, which does make growing easier, leaving you to concentrate on feeding and watering during the summer months when the plants are producing cucumbers. Hybrids require higher growing temperatures – a minimum of 68˚C at night. Fruit develops on the main stems so no pinching out is needed.

All greenhouse types are climbers and so you will have to provide some form of support, bearing in mind that when laden with fruit the plants will be quite heavy. New varieties are being introduced all the time so you will be spoilt for choice: ‘Carmen F1’, ‘Euphya F1’, ‘Birgit F1’.


Outdoor cucumbers
For ease of growing and reliability outdoor varieties can’t be beaten. They can cope with low temperatures, and do not need any support but the fruits are more likely to be straighter if the plants are supported. They can, of course, also be grown in an unheated polytunnel or greenhouse. There is also no need to remove the male flowers. Varieties have come a long way in recent years, the shorter, thicker, rough skinned traditional types such as ‘Marketmore’ have been joined by varieties that produce longer, smoother fruits. Look out for ‘Tanja’ and ‘Burpless Tasty Green’.

Outdoor cucumbers are hardy and do not easily succumb to disease. The most likely damage they will sustain will be from slugs.

Greenhouse varieties, however, do have a list of potential problems, but the best prevention against disease is to have strong, healthy plants in the first place.

Cucumber Mosaic Virus
They develop distorted, yellow, mottled leaves. If the plant is severely affected, there is not much that can be done except to remove and burn the whole plant. Removing and burning the diseased leaves from more vigorous specimens may mean you are still able to obtain a decent crop. This virus is spread by aphids.

Red Spider Mite
Look out for fine, silky webs on the leaves and tiny mites on the undersides. Biological controls are available. Affected leaves should be removed and burned.
More likely to occur in dry conditions, keeping the polytunnel humidity high by regular damping down will help to prevent red spider mite.

Powdery Mildew
A fungal disease that thrives in hot, dry conditions. This threat is eased by raised humidity and good ventilation. 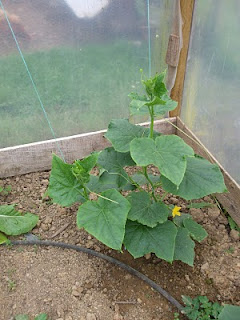 My cucumbers are coming along well now they have been planted. As you can see I have one string on the main shoot, and a second on my first shoot, which I will grow all my cucumbers off. I know it is hard to do, but you have to just leave a few cucumbers on the main stem, so first remove all the ones at the bottom, and all the other small shoots. I will choose another 3 or 4 shoots to string up and save later.
This shows how many cucumbers you can get from a single plant just in one picking. 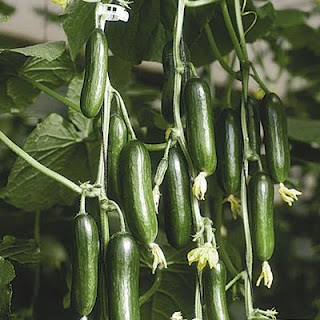 This is last year's crop and as you can see, I had nice healthy plants. I did get a little mildew at the end of the season.  I sprayed with  Bordeaux mix, which helped and ended up picking cucumbers to the end of October. 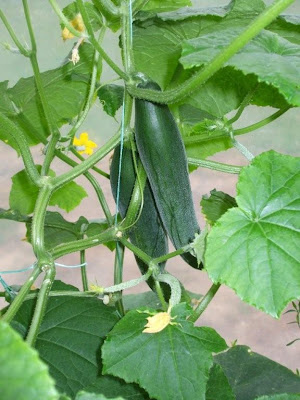