Tomato seeds are very easy to germinate, a good choice to involve children with, giving them the horticultural learning and hands-on brain stimulation that they just don’t get with cbeebies. Tomato seeds also carry all the characteristics of the parent fruit (apart from the F1 hybrid types) so little fingers can also be involved with squeezing the seed out of the over-ripe fruits, drying out and storage in an envelope
You can use the following step by step guide to sowing tomato seeds:

1.Fill enough pots or trays with a good quality seed compost. Give the compost a light watering.
2.Scatter the seeds thinly on top of the compost approx. 2-3cm apart.
3.Cover the seeds with a thin layer of compost, (approx 1.5cm) ideally applied using an old kitchen sieve.
4.Firm this compost gently with a small block of wood or the back of your hand.
5.Keep just moist in a room with a temperature of between 15C and 20C
6.Seedlings will appear within two weeks.

After the seedlings appear, the room temperature can be dropped to between 12C and 15C. It is important not to put them on a south facing windowsill where the temperature during the day shoots up and the excessive light levels cause excessive growth and possible leaf scorch.
When the young seedlings are 2-3cm tall and relatively easy to handle they can be potted on into smaller pots and kept in the house. Gradually moving them from one room to another, each time with a small drop in temperature so that you are beginning to harden them off before they go out to the greenhouse.

When March and April arrive the young plants can be trans planted into large pots or growbags in the greenhouse. The greenhouse should be heated, especially at night to protect against frost. The minimum greenhouse temperature must be maintained at 7-8C. But your plants will still survive unless it goes down below zero.

When you do plant the tomato plants in their final planting positions don’t be tempted to cram too many into a small place. Tomatoes are very hungry plants, one plant in a growbag will excel and produce almost as much fruit as 3 plants planted in the same growbag.

Here is how I did mine. 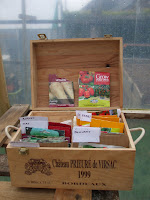 Well, the weather has finally warmed up slightly,  and as yet I do not have a propagator, so I will sow my seeds in trays and leave them covered with bubble wrap in the conservatory. I have sown tomatoes, peppers, chillies, cucumbers and lettuce, all to go in the polytunnel later. 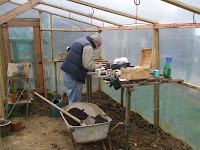 Hopefully, the temperature will not drop below 15 degrees, and if it gets too hot in the day I will remove the bubble wrap.
Once the seelings are showing through, I will give them as much light as possible.
Rain has been forecast for the next week, but in a way that is a good thing, as the temperature will be more even between day and night, and the light level is not important until after germination. 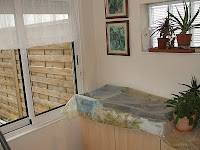 The way to avoid 'leggy' seedlings is even temperatures and plenty of light. So time will tell.

Well it went down to 13 degrees in the seed tray last night, so a little too cold and as it looks like it will be raining all day, I don't think it will get up to 20 degrees, which is what I would like. I definitly need to invest in a heated propagator for next season.
The tomato varieties that were sown were; ALICANTI,  ALISA CRAIG, NIMBUS and SANZANA, which are standard types for the greenhouse.
BELLA F1 a beefsteak for the greenhouse, and COSTOLUTO FIORETINO an outdoor beefsteak.
GARDEN PERM, MINI BELL and ROMA which are bush style plants with cherry tomatoes.

The cucumbers were TELEPATHY, a really heavy cropper for the greenhouse, the tip is to grow on the shoots, not the main stem, see in posting for other crops.
Peppers  were SWEET CALIFORNIA WONDER, chillies were HOT CAYENNE and HOT JELAPENO. I also planted some old courgette seeds that I found.

Some of the seeds were last year's, but it will be fun to see what actually comes up.

Well a change for the worst in the weather, made me bring the trays of toms in to the lounge fro a littler more warmth, but I noticed the temp in the greenhouse was higher! so moved them again this time to the greenhouse, and have kept them well isulated for the night, the good news is that Mrs TK has promised me a propogator for my birthday. 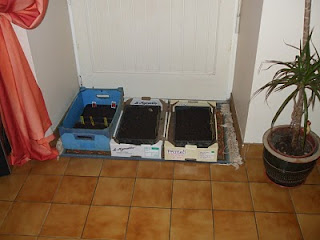 Trays in the lounge.

Finallly in the Greenhouse 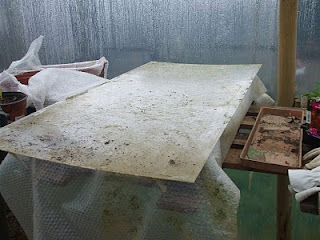 26th March.
Well I could not resist a tray of toms for a few euros in the supermarket. Just to compare against how well mine will do against the nursery raised ones. In theory, the first trusses will not set if the temperature is too low, so even though I might lose a few toms, I should have earlier fruiting plants. 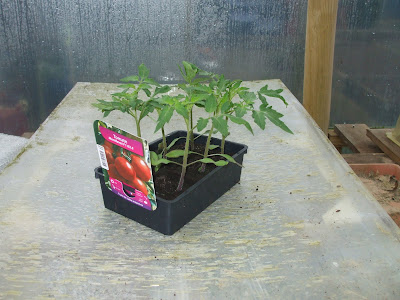