I had planted my first tomatoes in the greenhouse a few weeks ago and noticed  that the lower leaves were going off colour, so a few days ago I gave them their first feed and already I have seen a difference.

You can see the yellowing of the lower leaf and the patching on the other leaves on the first picture. The second picture shows a far healthier plant under a week later, far bushier and greener. Obviously, the plant did need time to settle in after being planted, but the feed did make a difference as well.
It has been very warm during the past week in the greenhouse, so I lightly spray the toms with water a few times a day to keep them cooler while they are making a better root system. As you can see there is no sign of scorch, which a lot of people worry about. However, I would rather risk a little scorch to keep my plants under less strain. 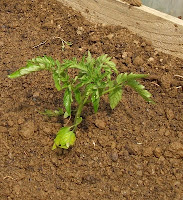 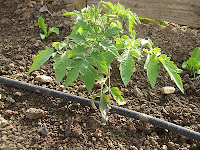