April 05, 2010
In this section you can follow my plants through the season, so it will be updated weekly.
There is always a lot of debate by amateur growers about the timing for sowing seeds. As most of us do not have a heater greenhouse, it is best to purchase a heated propagator. Seeds need a temperature of about 18 degrees to germinate. This is why most people raise their seedlings inside the house.
Space then becomes a problem and most of us are reluctant to move them into an unheated greenhouse.
The problem in early spring is that it is still quite cold at night, yet on certain days it can reach 30 degrees in a polytunnel, and such a fluctuation in temperatures is the worst thing for tomatoes.
As shown in the table below, the effect of lower temperatures will be that you will not get good fruit setting on you first trusses.
However, you will still have a good healthy plant if the temperature has not dropped below 5 degrees, and you will have earlier fruit than if you had delayed sowing.
Also the area in which you live makes a big difference, here in central Brittany I sowed in mid March this year (2010) and it is now early April and my small seedlings are in the greenhouse already. The day temperature in the polytunnel is fine during the day, but some nights it has dropped as low as 5 degrees, so I have kept as much protection around my seedlings as possible to keep them warm.
Pictures taken 5th April 2010 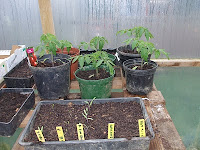 I do expect not to get good fruit setting on my early trusses, but I didn't want to sow any later than I did, so time will tell as to how well they will do.
I have also purchased some commercially grown plants, which are about 6 inches high, so it will be good to compare.
Not all of my seedlings have shown through yet, so I will also see if these do come up. Mrs TK has promised me a heated propagator for my birthday this year, so next season I think my seedlings will have a better start. 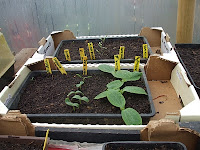 As you can see, my cucumbers have had a good start, and I will purchase some melon plants in about a month's time, as they really do need higher temperatures. Unfortunaetly this year has not started too well temperature wise, so lets hope we get some good weather soon.