April 20, 2010
There are many ways to train tomatoes, and I will start first with the Guernsey arch/loop system. 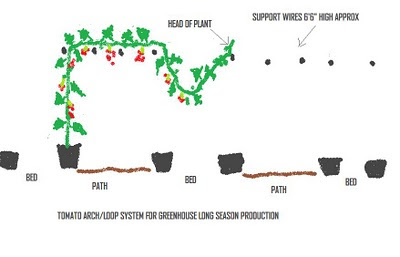 As you can see, this system is used for high production from each plant, and the plants cross over above the path, so you need your support wires high enough, about 6'6" depending on your height, although you can stand on a box to trim the plants overhead.
The plants should also be spaced at least 18" apart, and the leaves hanging down over the path can be removed, and a few of the other leaves overhead to give good air circulation.
About a month before the end of the season, nip off the head to enable the fruit on the plant to mature. 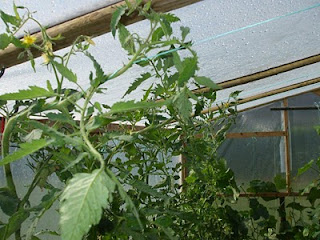 If you have a low roof  like me, it is best to train the plants on a string to keep the heads off the plastic. The plant that will be growing from the other side of the path I do the same for, but stop the head when it reaches the crop wire. Once the plants have crossed each other overhead, you can thin out a few leaves, mainly the ones hanging down, but do not thin out to much as they are needed for  fruit production, and shade. (picture is 2009 crop)
As an avid follower of GYO forum  I noticed 'Womble' posted a picture of their home made arch support stystem. It is a problem in small polytunnels or greenhouses to put wires overhead as a support, so as you can see, they made a separate support sysyem. You could do your own with a T-Post either end and run wires in-between, then a support in the middle, or a similar version of Womble's. Just remember the amount of weight it might have to support.
Wombles post and picture 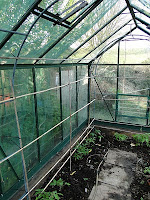 'There was a thread talking about growing tomatoes over the roofs of greenhouses.
It got me thinking to see if I could use my old cheap rubbish garden arches in the greenhouse.
Well I can and here is the proof.
As the tomatoes grow, I can add new canes enabling me to grow the tomatoes all the way over the top, if I so desire and not a bit of weight on the greenhouse.'
HIGH WIRE LAYERING SYSTEM. 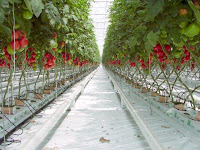 Introduced in the 1960's this system is still used by many commercial growers. The idea was to keep the growing head always in the light, and let more light through to the rest of the crop. Also it allowed for a lot faster picking rate, as most of the ripe tomates were at waist hight or above. A car battery powered electric trolly was used to trim and lower the plants as they grew. This ran on wheels like a train, using the heating pipes as rails. 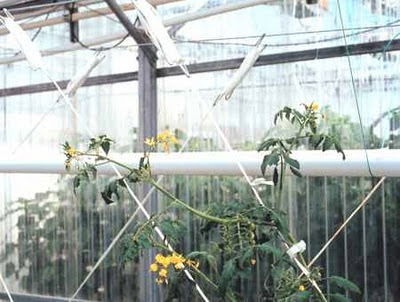 The support wires were 10 to 12 foot high and a bobbin was hooked on to the crop wire, and slowly unwound once a week as the plant reached the crop wire. The stems were then layered on top of each other as they were lowered, and ran along the floor area, usually supporte by wires, or left on top of the peat bags. The plant was also moved along as it was lowered, so the head of the plant ended up quite a long way from the place where it was planted. I will find some pictures to show this system better.
Well I managed to dig out an old picture that was in our local paper of me on my high wire trolly, which I used to trim and lower the plants from. We eventually added a car starter motor linked up to a car battery, so I could move it along the pipes, without getting up and down to do it. 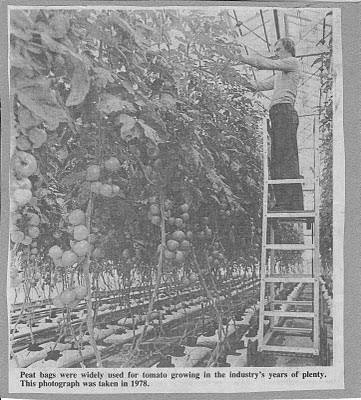