May 25, 2010
Apparently, Oca make good companion plants, and as that they do not get blight, I thought that I would follow 'Ian the Oca man' and do the same thing, after his very successful trial that he did last year.
As you can see by his results, he did extremely well with both crops. 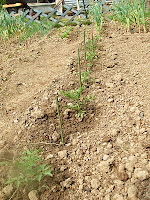 I had a few spare beefsteak tomatoes which although still fairly small, were suffering with heat in the polytunnel. The packet said 'indoor or outdoor', so as you can see, I have planted them by the Oca.
The variety is Tomato Costoluto Fiorentino, which is a sweet deeply ribbed fruit, making a wonderful stuffer and slicer, also commonly used as a component for sauces. Italians consider this one to be one of the top 3 tasting tomatoes in the world. Very versatile with a rich flavour. A heat tolerant tomato, so some have also stayed in the polytunnel and are looking better already after being planted.

June 28th 2010
My Oka and tomatoes are both growing well despite the lack of rain. I have feed and watered them a few times over the last month. The Oka should be banked up as you would a potato plant and I have started to do this.
At first I thought that I had planted my tomatoes too close to the Oka, but I remember that they do not like full sun, so maybe the shade will help, the only problem being is that I will eventually have to bank up the bottom of the tomato plants as well when the Oka gets a lot bigger, but next year I will leave more room. 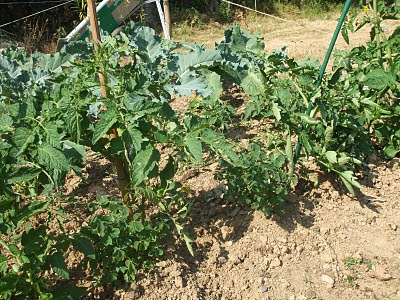