May 11, 2010
At the start of the season some novice growers might get confused with shoots and trusses, so here are a few pictures to help.
Also I have a section here about potting on. As I have said before, this is what works for me but we all have our different rules that we stick to. 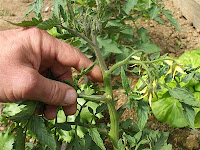 Here is a truss, and as you can see it is growing straight out from the stem. It is not a good idea to cut them off, as it could cause infection as it is part of the stem, unlike shoots, which are like little suckers so can be snapped off. If you feel your plant is weak and are tempted to cut it off, do not worry, as the plant will probably look after itself and not set
the fruit, then or slightly later on.
Here are some pictures of the various stages of fruit formation. 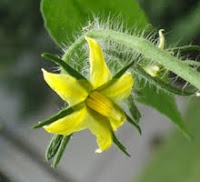 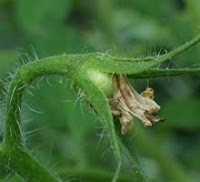 Transplanting your seedlings
Well there are many different opinions on when to transplant, so here are a few ideas. 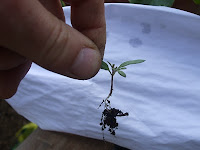 Commercial growers in the past, tended to sow in large seed trays, as this meant they took up less space and was cost effective. Transplanting the seedlings when they had their first two leaves, by taking a clump of seedlings and very carefully separating them, holding them only by the leaf and not the stem as this would not damage it.
Fill a 4" pot with dryish compost, then make a small hole with a dibber and drop the seedling in, then gently firm the seedling into the compost.
With modern techniques a lot of them now direct drill with a machine, individual seeds into a compost block. This is then planted directly into a larger compost block, so the roots are never disturbed.
When I worked in Holland, we had a large machine driving down the rows of enormous greenhouses, leaving behind rows of compacted compost blocks, ready for the small compost blocks to be trasplanted into.
But remember we were probably raising thousands and thousands of seedlings. In fac,t we rasised our seedlings in a special gel, before they were pricked out into the smaller blocks. This made the trasplanting far easier than using seedling compost.
So back in the real world, here is how I did mine. 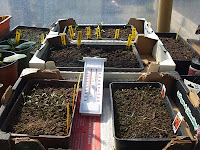 I sowed my seeds directly into small trays, this makes it easier if you have to raise them in a propagator or a window sill, as they take up less space.
I then transplanted them into module trays, and when the leaves are touching and the plants are competing for light, I then push the block of compost out of the tray and plant it into a larger pot. 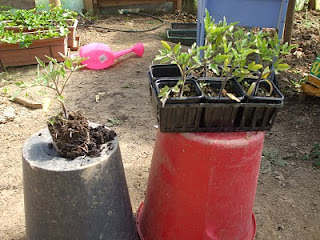 This picture shows the plants ready to be transplanted into larger pots. Notice the good root growth, and the plants are all competing for light with each other. If you leave it any longer you will get 'leggy' plants. Also notice the discolouration on the leaves, this is because they have used up all the nutrients and probably some has been washed out with watering. In fact, this plant could go straight into the soil in a greenhouse, and it would do it no harm. 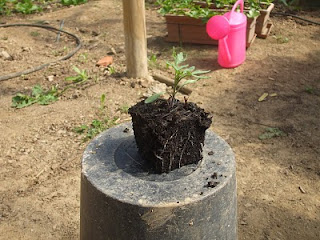 This picture shows a younger plant, notice the small number of roots and the plants were still not competing too much for light. With not enough root formation, the compost will crumble away from the root, so it is better to leave them for a  few more weeks. 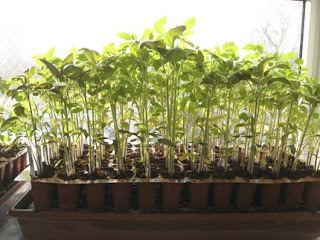 This shows very 'leggy' plants, which have been left too long before transplating, they are also quite pale, which shows lack of nutrients and light.
Advice on early tomato care