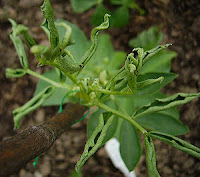 In 2008, 2009, and now 2010, there have been many reports from allotments all over the UK of manure having been contaminated by residues of a herbicide called “aminopyralid”. This has caused major damage or even failure, to crops of potatoes, tomatoes, peas, beans, carrots, lettuce and similar crops, where the manure has been used as a fertiliser. How did “aminopyralid” get into the manure?

This subject has come up quite often on the Grow Your Own Forum so I have added a link to explain the causes and problems.
Unfortunatly some of this manure is used by some commercial suppliers of compost, and a few people have had young plants effected.

MANURE CONTAMINATED WITH AMINOPYRALID or CLOPYRALID