Cucumbers challenge, fifty off one plant! 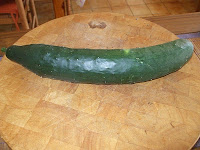 I have been away for just under a week, and Mrs TK has been doing a great job looking after my crops, so much so that she even had to pick the first cucumber that I had netted up to keep off of the soil a few weeks ago. 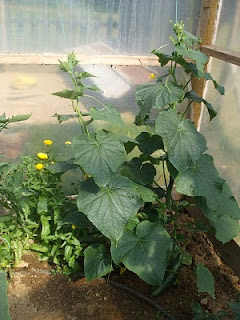 This is the plant that I have trained a shoot from, and I can hardly believe the transformation in a week. I have yet to run another shoot off of it, so have left quite a few cucumbers still on the main stem. However, I will pick any new ones off to leave more energy for the shoots. I have counted 25 good cucumbers so far on the plant that are swelling. A number of other smaller ones are turning yellow, so I will snip these off. It is just the plant telling me it has enough to cope with. Once some of the larger cucumbers have been picked, the plant will settle down again.
My plants are looking really healthy this year, very dark and green which is a really good sign. I put this down to the lovely sunny days that we have had for the past month, and the fact that I have fed my plants with tomato feed a few times a week.
So the challenge is to get FIFTY cucumbers off of one plant by the end of the season. I have three plants, so have a little back up, as cucumbers are prone to root rot and half way through the season suddenly start turning pale green and eventually yellow.
I will stop the main stem when it reaches the wire, about six foot high. Then when the two shoots have reached the wire, I will stop them as well. A few other shoots will be trained up to take over from them.
As you can see, there will be quite a few to pick over the next few weeks.
The variety is Raider F1, which will be eaten in salads,  made into salsa, cucumber dips  pickles, and of course given out to friends and our French neighbours. 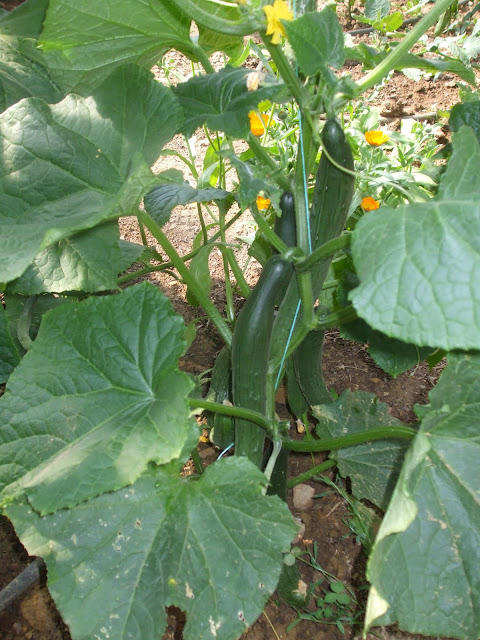