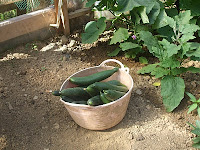 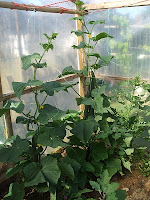 Well I have picked another 13 cucumbers today and that is a total of 40 already. My twin shooted one has produced 12 so far, and I am going to train another shoot up from it and stop the head very soon. 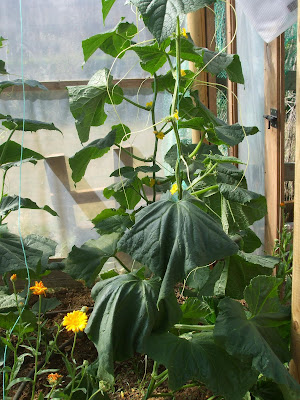 I have noticed one plant that is wilting, so I know it has a root problem. My soil is still quite compact as I have not really added enough compost to it for cucumbers, which need very good draining soil. I spray it a few times a day with water and this revives it for a few hours. This shows me it cannot take up enough moisture, even though the soil is moist. I have added a pile of extra soil around the base of the plants, hoping it will make more roots, this sometimes works.
I have also cleared it of fruit, this will put less strain on the plant. Luckily, it only wilts in the day and in the evening when it is cooler it is fine, so I might be able to rescue this plant. But anyway, I still have another seven plants, and I do feel I will have enough cucumbers! 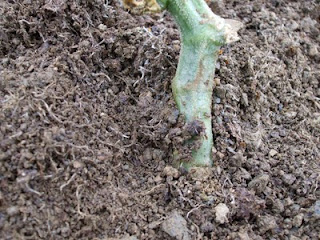 A few months later the cucumber is producing really well, here you can see all the new tiny roots that were produced by adding the extra compost.
Cucumbers