The American way and Down-Under

August 30, 2010
I have been following an American Tomato Forum for a few months, as I am interested as to how they grow tomatoes over there. The forum has many contributors, some from the USA and also Canada, Australia, New Zealand and many other places, so the climates and techniques do vary a great deal .
However, I will on this part of my blog, try to show you some of the ideas and techniques that I have seen, and also some posts that have caught my eye. One thing  that I have noticed on this great Forum is that they do like to go into great detail when they have a particular problem and get  quite technical about it.
I have just noticed that the Forum will be members only from the 3rd September so have a good look at it before if you can.
Here is another good US gardening forum
To give you an example here was one question asked.

Here are a few answers.

"If they drop below 50 degrees, a flavor compound called z-3 dexanol is just gonna flip itself off like a chemical switch, permanently. "

"When you buy a tomato, it is still alive. So is the broccoli, the lettuce, and the other fruits ...and vegetables in your kitchen. A nice, fresh salad is one of the few foods that we eat while it is still alive. For most of these vegetables, putting them in the refrigerator just slows them down, causing them to die slower, but for tomatoes, along with avocados and bananas, the cold of your refrigerator speeds up their death. In tomatoes, this damage causes all sorts of chemical changes. Flavor compounds, such as Z-3-Dexanol shut down. These chemical changes also change the texture of the tomato, giving it a granular texture.
This is only true for living tomatoes. Once you kill them by cooking, the refrigerator is the perfect place for them, as the cold also slows down bacteria that can cause foods to spoil. "

This picture will give you an idea of how many of them train their tomatoes, usually grown in containers or raised beds with a metal cage to support the plant. They do like to grow bush/determinate plants, and are also heavily into Heirloom tomatoes. The variery is Beginner. 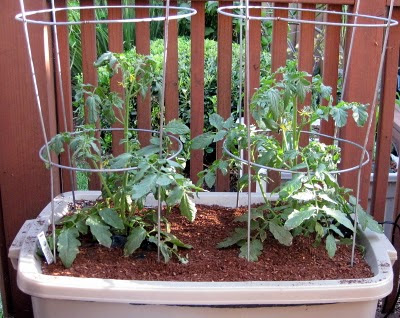 This is a bush variety Early Girl, nice bit of re-cyling with the tyres. 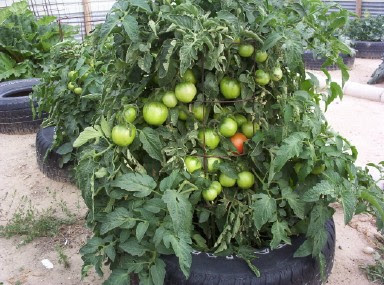 These are pictures to rival my polytunnel, it's called an earth tunnel and was made by Richard from New Zealand, who is also the person I really am indebted to, as he is the same person who kindly sent me some Guernsey Heirloom tomato seeds, which are like gold dust to me. 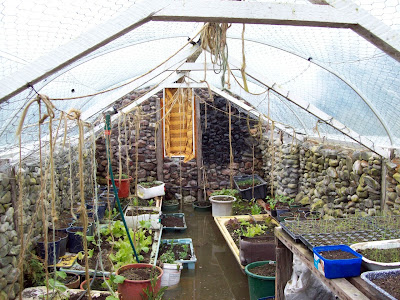 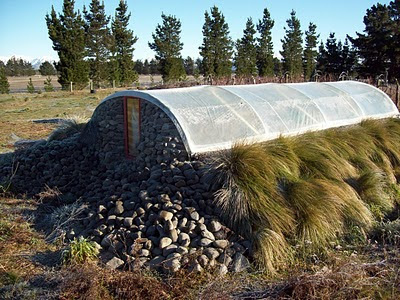 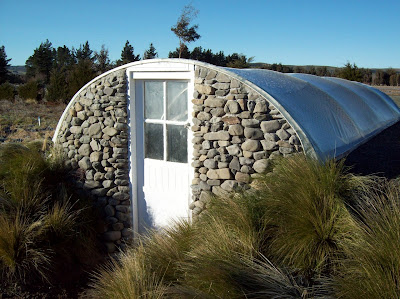 Here is Richard's comments
After reading about 'earthship' house construction using thermal mass as its sometimes only form of heating/ cooling, I set about building this tunnel house, built on the same principals.I started with 6 railway sleepers for each of the middle hoops and 4 power poles, 2 each end, these were all cemented in to place, large bolts inserted and 6mm wire netting added between for reinforcement. One ton of cement and a hell of a lot rocks from our local river went into the four walls, then soil added to the sides and planted in native grass.
In winter with outside frost temp down to -8 C/-18 F, inside has not gone below 4 C/40 F, some tomatoes "black krim" did make it though winter and have just starting to come away again now. In the summer we average day time highs of 30 C/83 F but when it gets hotter the inside/outside temperatures tend  to even up.
This tunnel house gives me about a 9 month growing season and has helped expand the outside gardens season also. My thoughts now are towards building a second larger one with solar and woodburner for heating.
We have had about a year's worth of rain in the last two weeks, that's why there is water inside, it's all ground water it's just coming up from below.
Well that's all from across the pond and Down-Under, but I will update this section often.
The American way and down-under