October 21, 2010
Autumn is well and truly here with some early morning frost today. However, the sun has been shining and it's been the perfect few days to get out in the garden.
Bramble and I decided to plant some garlic and onions. The garlic is French Thermidrome and Marco, which apparently are quite strong. Last year, I planted my garlic a little late and then we had a really long dry spell. So we are hoping that next year's crop will be better than this years, which were good, but a tad small. The onion sets are Electric Red, and the shallots are Jermor. 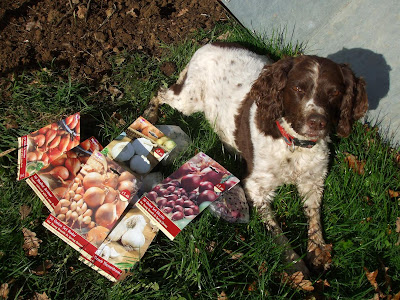 The downside  of  Mrs TK having horses is that we have to muck-out  the stables every winter morning, although, luckily the girls are not inside yet. The upside is that I always have plenty of well-rotted manure to mix in with the soil. So Bramble and I dug in a few wheelbarrow loads before planting. 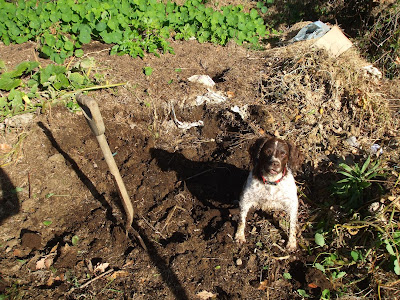 Well, watch this space as they say. The celery on the right are more or less ready to harvest, in fact Mrs TK has already been making some tasty celery soups.

I also planted a few Scarole lettuce in the Polytunnel, although it did go down to zero in there last night. I think that was a one off for now, so hopefully they and the toms and peppers will be OK for a few weeks.

My plan is to over-winter my tomatoes for as long as possible, luckily my one spray of Bordeaux mix held back the little early blight that I had. The only problem I have now is a little mildew, which usually starts on a an open wound from a broken leaf, and a little has started on some of the old trusses.
I might give them a light spray of something if it gets worse, but for now I just do a daily check, cutting out any affected tissue.
I also keep the polytunnel well ventilated, as the temperature inside to outside is not a lot different and I want to keep the humidity as low as possible. Last night, being a very cold dry night, I obviously kept the doors well shut, but most nights I tend to leave a crack of air, and the doors fully open in the day, rain or shine.
Setting of the fruit will be a problem from now on, due to the low night temperatures. The cherry tomatoes seem to set slightly better, but as you can see from the pictures, it is a bit 'hit and miss' at this time of the year.

The continuing story of the 50 cucumber challenge
Regular followers of my blog will know that I set myself a challenge to get 50 cucumbers off of one plant. Well, I did get to 47 and decided the plant was due for retirement. However, as you can see, I saved it from the compost heap for a while yet because although I had stripped most of the leaves off due to mildew, there is still some nice green growth on it and all I need is just 3 more cucumbers!
I am taking off a few small cucumbers near the growing tip, so as to give the plant a chance to make a little more foliar growth. 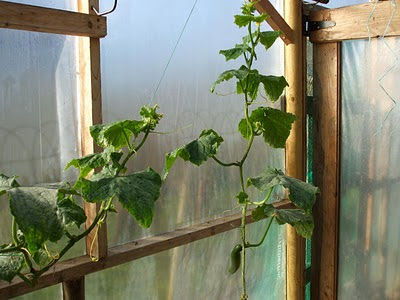 The farmer in the next field to us has finally harvested his maize, which means that our two girlies can go back in the part of the field that bordered his maize. The reason we had to keep them away, is because the little piggies would have reached over and nibbled at his maize. 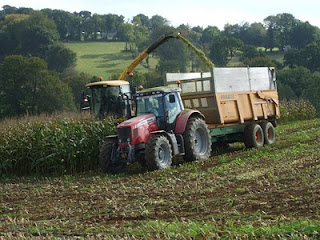 Here they are enjoying the fresh grass, which has grown a bit since they were last in the field. 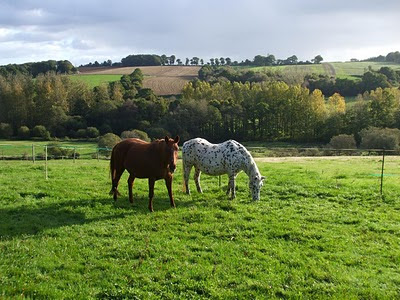 What a difference a day makes!
Early morning frost the next day. 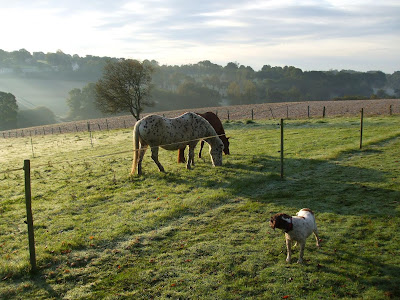 What could be more rewarding than seeing your horses grazing on a lovely clear October morning . 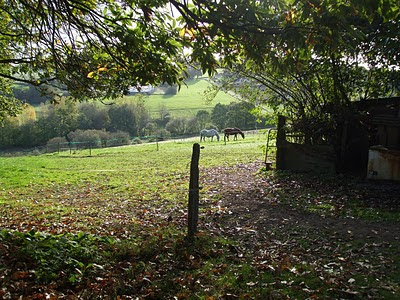 The post lady has today dropped a card in the letter box while we were out, to say there is a parcel for me to collect. It was addressed to Steve (Tomatoking) so I presume it is my prize for being 'member on the month' on the grow your own forum . I will let you know what I have received when I have been up to collect it later.
Oh, and I have just been reminded that it is Thursday, which means it's my day to cook dinner. So I had  better go and see what culinary delight I can rustle up for my beloved. As she is a vegetarian it's going to be quite a challenge, and there is not a fish and chip shop or a Chinese takeaway for miles!