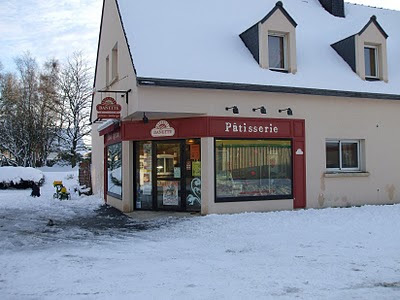 The local village boulangerie, as well as supplying gorgeous bread and cakes, is also a bit of a meeting place for villagers to catch up on the local gossip, so one thing you must not be when you are in there, is in a hurry.
Just patiently wait your turn, and tune into the gossip, which is easier said than done for me, with my very limited French. Luckily, Mrs TK can follow every word, and is able to converse correctly, unlike my nods and grunts, with a smattering of the odd 'bonjour' or 'bonne journee'.
Of course, the 'iced cakes'  makes the trek in the snow well worth while, and not forgetting the nice crisp warm baguette! 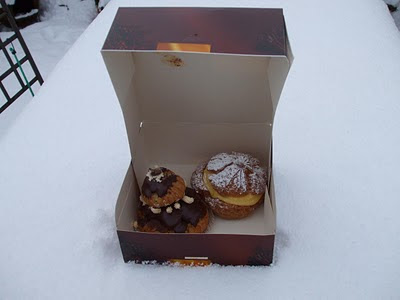 Whilst on our walk, we spotted a couple of  dogs having fun in the snow, the normal French dog sport of chasing cars had been abandonded, due to the actual lack of cars passing, so these two had decided to chase pedestrians instead, well OK stand there and bark! The big dog was a bit bolder and came up to us for a good sniff as well, with his little back up hiding behind him. Mind you, I can see why the smaller dog had a problem in the deep snow, chasing us! 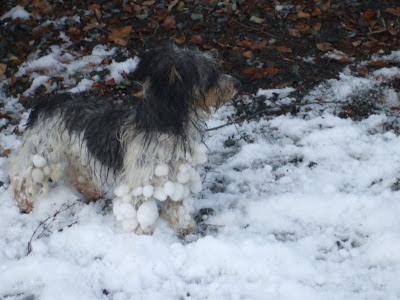 Bramble on the other hand, had found the drinks cabinet while we were out and had helped herself to a whiskey, then settled down in the warmest place in the house. 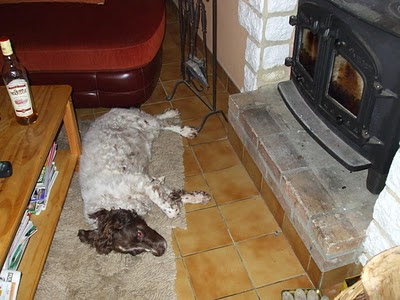 Mrs TK looks quite well after our long trek, she would have prefered to have taken the horses of course, but seeing that they had not been out for a few days, I  thought it might be a tad safer on foot. 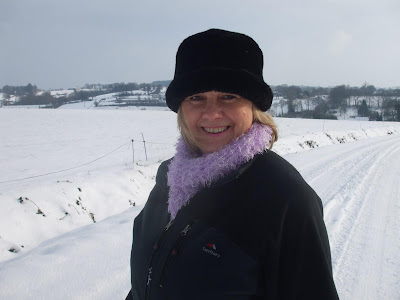