January 03, 2011
I am not really geared up to sow too early, but spurned on by a thread on Grow Your Own Forum, I have decided to sow a few early seeds. The problem is not actually sowing the seeds, it is how to raise the plants before they go into the polytunnel, before the last of the winter frosts.
So I have just sown 15 seeds, which I am sure I will find a place for in the house until they are too big.

I have sown 5 x Guernsey Island seeds, which have been sent to me by Richard from New Zealand. These are Heritige tomatoes which were grown in Guernsey probably before I was born. I have only found them grown in the States or down under, so they are pretty rare seeds. A big thank you to Richard for sending me some seeds.
I have also sown 5 x Ailsa Craig, which I happened to have some seeds left over from last year.
While I was at it, I added 5 x California Wonder sweet peppers.
Sowing by the correct moon cycle the seeds had to go in today, and not having yet got a heated propagator I went out to buy some seedling compost and found this seed tray with a cover, for about 15 euros. 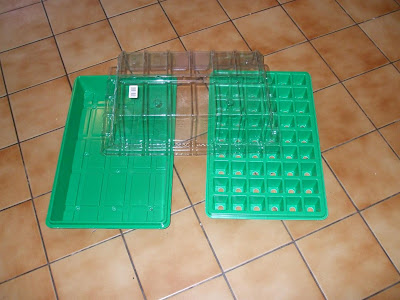 I kept the bag of compost warm by  the fire for a few hours, and wet it with warm water before sowing the seeds. The only window cill that I could use that was south facing is unfortunately the only window not double glazed, so I lined it with some polystyrene. Luckily, it has the typical French shutter, which keeps most of the draught out, and  I will be able to give the seedlings some daylight once they are up.

I have also added a towel to go over the top of the plastic cover, tomato seeds do not need any light until they are up, and the towel will add extra warmth. I have a temperature sensor, which I will place under the towel, to see how warm I can keep them, an even temperature of around 20 degrees is best, until they are up. We have got a brilliant wood burner for heating, which keeps the room at about 20 degrees, and in the morning it has dropped to only about 16 degrees, so that should be fine.

last night I moved the tray away from the window, as it was 17.5 in the window and 21 in the room.
The minimum it dropped to last night was 16.2, so not too bad.