July in the Poly-tunnel

Having neglected my poly-tunnel for a while, I thought that it was time to spend a morning in there having a tidy up. It looks, on first impressions that I am growing a crop of marigolds, but they are just to keep the white fly at bay.
I decided to thin them out a little, as some of the older leaves were dead and some were also shading some of my small pepper plants that I had put in very late. 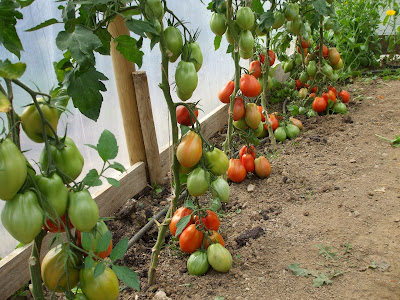 The Coeur de Boeuf plants are producing well, so one of my first jobs was to pick all the lovely fruit. Bramble stood guard over them in case the chickens decided that they wanted an early lunch. Mrs TK will probably make some of her delicious tomato sauce with this bucket full. 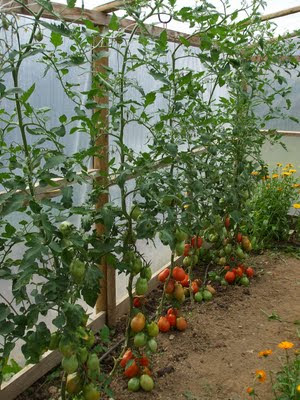 I removed plenty of bottom leaves for air circulation, as the weather is slightly on the change now, and the best way to keep disease at bay is with good air circulation. I also removed any side shoots and twisted the plants around the support string.

One thing that you might come across with some tomato plants, is that they suddenly develop two shoots instead of  a head. Just choose the strongest shoot to take over and cut the other one off. This is the only time  that I save a shoot on cordon tomato plants.

Bush plants on the other hand are best left with the shoots on. I put these in the poly-tunnel for an earlier crop of them, as I normally grow them outside because as you can see they are a waste of space in my poly-tunnel. So I have stripped them of all of the leaves and shoots, so I will be able to pick them all soon and remove the plants. Cordon style cherry tomatoes are the best for a poly-tunnel. Bush ones are really good to grow in pots or containers. The tomatoes will all ripen within a few weeks of each other, unlike cordon plants which are for a longer cropping season.

As some of my plants have reached the top of the crop wire, I have put some strings across to train them on and to keep the heads off the plastic.
This is called the Guernsey arch system and you can read more about it in the tomato training section. The idea is to keep the head in the light and to make the best use of space in the poly-tunnel for a longer cropping season.

Bramble had been a little quiet while I was busy, so I went to see what she was up to. I found her looking a little sheepish and grubby, only to find that she had been digging for moles.

I was very late with sowing melons this year and they didn't look too healthy, so I purchased a few plants locally. As you can see the first ones are starting to swell, so I have added a support string to keep them off  of the soil. Later, as they get heavier, I will add some type of netting to support them in.

I always grow my melons on the shoots of the plant, as I find this gives me better results. Just about four is enough for one plant, so just keep a good space between each shoot and cut the other ones off that you are not using. You can stop the head of the plant when it reaches the wire. If your plant is a little over loaded, the small forming melon will turn yellow, so cut this off and wait for another one to form later.

I found quite a few little friends in the poly-tunnel helping me keep the insects at bay. Ladybirds will eat the eggs of insects, so always leave them to do their job. 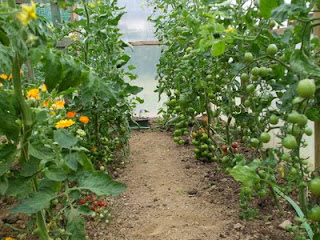 So here we are, the results of my morning's work, a nice looking crop, fully trimmed, weeded, de-leafed and picked. I also gave them a good high potash feed, to encourage fruit production.