November 20, 2011
I had noticed a lot of white feathers in the chicken coop a few weeks ago and I wondered if Clarissa had some sort of mite attacking her. I managed to get hold or her to check her over and give her a dusting down of powder that I had used in the past. In the process of picking her up a load of tail feathers came out in my hand as I tried to grab her. 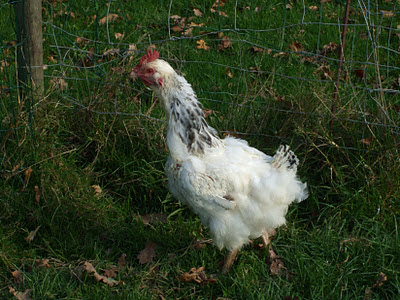 She seemed clear of mites, so I thought it could be moulting, but it seemed strange at this time of the year.
A little research showed that chickens can moult at  any time, but that it could also be brought on by a shock and the previous week we had a thunderstorm and also very noisy low  flying jets, which can cause moulting.

The feathers continued to fall out and the weather was getting a lot colder at night, she was looking very sorry for herself and I was starting to worry a little. However, this week I noticed some soft  new feathers, so it looks at though she will have a nice new coat just in time for winter. Apparently a new coat is a lot warmer than old feathers, so it was just a natural process or moulting after all. 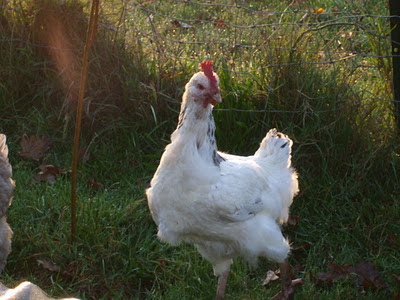 We are down to one egg a day now from our three chickens, but apparently they do not lay when moulting and they all do lay less in the winter anyway.

We have had 3 eggs a day for most of the summer and after three year of laying we are probably in profit after the initial outlay for the hutch and fencing. But more importantly they are great to have around and have us in fits of laughter with their antics.

Despite us having to lock them in the hutch at night and letting them out first think in the morning, in case a fox fancies a late supper and that they can try to feed on some of our young crops when they are let out to roam the garden, we still adore keeping chickens.

Here is a video we took of Clarissa who loves to be up on the roof!