A cold and frosty morning

December 27, 2011
Unlike last year, we have escaped the snow this winter so far. This morning is a gorgeous clear, but frosty day and it is zero degrees in the poly-tunnel .

All that is left growing in there are peppers and chillies, which seen to be surviving the cold so far, due to their slightly harder foliage than tomatoes, which passed away a few weeks ago.

The garlic and onions that  were planted out a while ago are poking their heads through and need the cold to produce a good crop. We also had a nice picking of Brussels sprouts to go with out Christmas day dinner and there are plenty more to harvest.

Bramble and I took a stroll down to the fields to break the ice in the horses water butts, as the horses are still in the field shelter and seem quite cosy in there with their winter rugs on. Dill has COPD which affects her breathing and we have found that she seems a lot healthier being in the field shelter as opposed to being stabled at night. This also means that we do not have to muck-out every morning, which is an added bonus.
Obviously the field shelter has better air circulation, which helps Dill and it is well sheltered from the wind.

We have also purchased a product to add to her food and although it smells of menthol, like a giant extra strong mint, she still tucks into it and it seems to be doing her good. The girls do enjoy a polo treat after their feed, so maybe that is why she doesn't mind the taste of her food now. 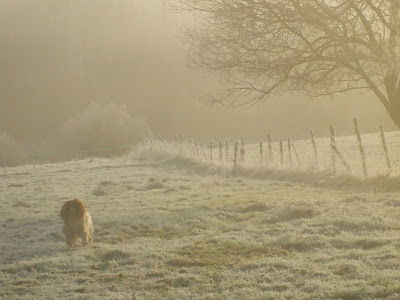 I am sure that we will have some colder weather in the coming months, but once Christmas has passed I feel we have broken the back of winter. Last year we had a very mild February which spurned us into some early  sowing, only to be caught out later. So I will try not to get too excited when I see the first signs of an early spring. You can try to cheat the seasons a little with heated propagators, but the plants do have to be grown on somewhere and even if you can keep the frost off them, the lack of light will only give you 'leggy' plants 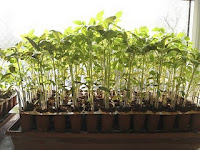 Leggy plants will probably not set their first trusses and you will then get an unbalanced plant. The setting of fruit even in the early stages helps control the plants and stops them from just producing a plant which although will have lots of foliage and will look healthy, it will not produce the best crop and your crop will actually be later that plants sown at a later date.

If you do have a conservatory that gets plenty of light and some heat from the house, then you can risk sowing earlier. I really like this picture from a blogger in the States that has really taken this to heart. But I am not sure that Mrs TK would approve. 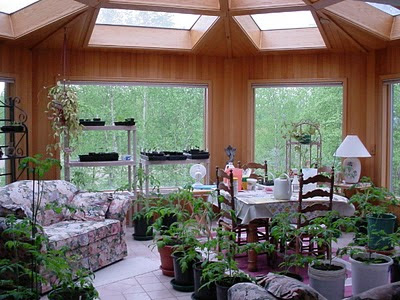