January 16, 2012
We have had a very mild winter so far here in Brittany, but this morning it was minus five, which will kill off a few bugs and diseases.

The herb wheel has a few survivors in it, but the raised beds are looking pretty bare.

The neighbours had to come and have a nose as I was taking some photos, they seem happy enough.
It is such a glorious clear morning, but let's hope the snow stays away.

Anna and Dill have not been stabled all winter as they have been fine in the field shelter. But this morning they are due to be re-shod so they have breakfast inside while waiting for the farrier. It looks like they might have to have a few nights in the stable this week if the cold continues. But I keep telling Mrs TK that they are just animals! 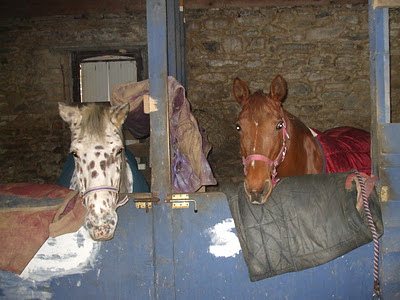 I am sure there is a little tidying up that I could be doing in the garden, but it is a lot cosier sitting in front of the wood burner attempting to start 'Vantastic Encore' the sequel  to Vantastic France, which I am relieved to say has already sold quite well in the first week.