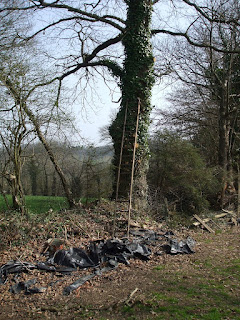 Spring has finally arrived and a few warm days have spurned me into action in the garden. The first major job was to cut down a few large branches and the odd dead tree in the top paddock as a start, although with 7 acres we do have a fair amount of wood to cut.

Risking life and limb up a wooden ladder with a chainsaw is not to be recommended if you do not like heights. But as long as you are careful and have a trusty partner to hold the ladder steady, there should be no problems. I do find it beneficial to secure a strong rope to large branches or someone below could end up seeing stars in daylight.

The wood should dry out for a year or two before being used in the log burner and the small branches can be used for kindling, or shredded in to chips for weed control or paths. 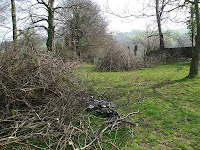 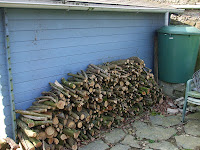 As there still is a little frost about when the sky is clear at night I took the precaution of covering my early lettuce with plastic water bottled cut in half, or anything else that I could find. They all seem to have survived a few nights of frost that we have had so far. 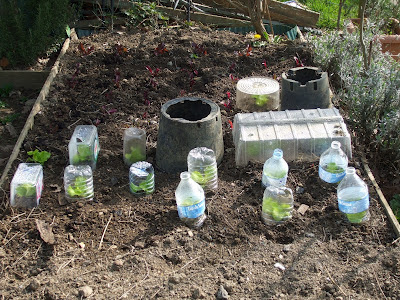 I have previously stated I am limited for time in the garden and poly-tunnel this year, so I decided to buy a few nice plants from the garden centre here in Brittany. The first job was to get them potted up into larger pots as tomato plants need as much light as they can get at this time of the year. The need to be spaced out so the leaves do not overlap. 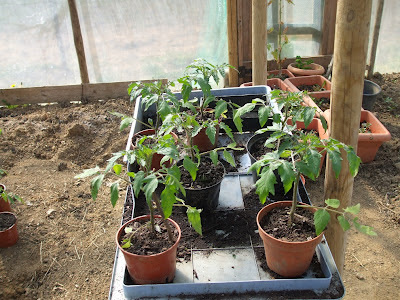 Another important job is to nip out the tiny shoots so that the plant concentrates its energies in to the head and the tiny bunches that are emerging. This is best done with your finger tips and you can also remove the two seedling leaves at the same time as they have done their work. 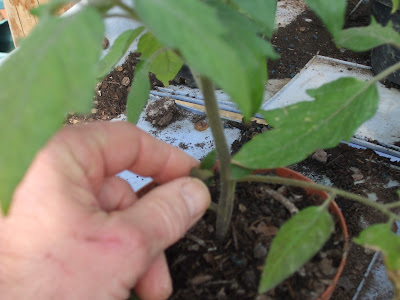 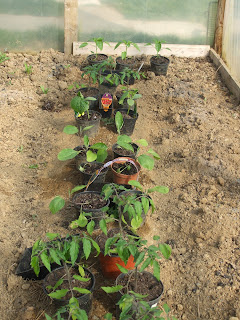 I have spaces most of the plants on the path and will plant them into the soil in a few weeks time. I also bought a few Aubergines, Peppers and cucumbers. If I see there is going to be a hard frost, then I will cover the plants with some fleece at night just in case.

My soil had some well rotted manure dug in during the winter full of nice juicy worms, so they would have done a good job regenerating the soil for me.

Spring is such a wonderful time of the year and gardening is pleasure not a chore. Everything is starting to grow and little shoots are showing on the vines, fruit trees and bushes. The lawn's look so neat after their first cut and the last of the winter leaves can be raked up and put on the compost heap. So as they say 'enjoy your gardening'
Mr TK .