May 02, 2012
Indoor cucumber plants are fantastic croppers and the only real problems can be damping off, which is why I plant mine into a large pot which drains faster after watering. If your plant starts wilting this could be an early sign of damping off.

I have an old post here about first aid for early stages of damping off, just pile some compost around the base of the plant to encourage new roots.

To give my cucumber plants a good start, I remove the early cucumbers that start growing on the stem, do not worry about taking them off as you will get plenty more in the future. As I said cucumbers are prolific croppers, but if there are too many forming on the plant they will turn yellow as the plant itself can't cope, so less is more and you should still get at least 40 to 60 cucumbers from each plant using my system of growing on the shoots, you can leave the odd 3 or 4 on the stem at a time when the plant is quite large. 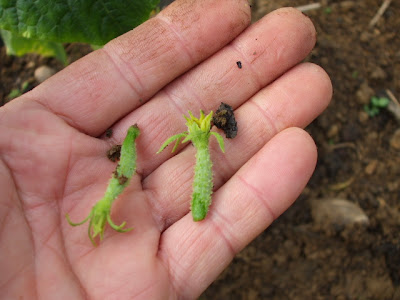 I like to train 3 or 4 shoots out from the plant, which gives a bigger crop, but I tend to remove the first few lower ones. 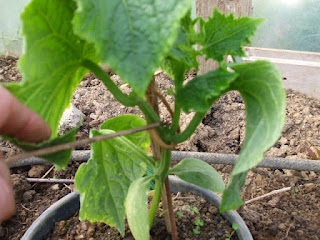 This is a small drawing of the 'fan' system that I use, but you do need a lot of space so I place the plant at the gable end of the poly-tunnel. Here are all my posts about cucumbers. 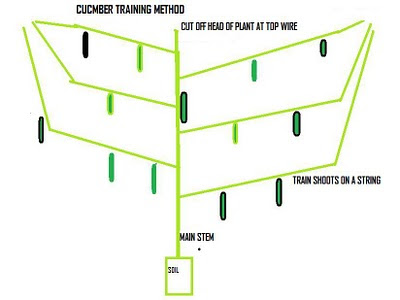