May 22, 2012
Melons can be difficult to grow at the best of times, they need plenty of heat and light and are prone to dampening off. In the spring that we have had there was no way that I would have been able to produce nice strong healthy plant, so it was down to the French garden centre to get some decent plants that had been raised in a heated greenhouse.

Just a quick point about buying plants, supermarkets might be a tad cheaper but once moved inside without good light they soon deteriorate. Places like Gamm Vert which is a French garden centre group usually have their plants in a covered area with much more light than a supermarket, so I usually buy my plants there unless I am early enough to buy plants in a supermarket with in the first few days of them arriving there. Also supermarket plants are not always watered and feed that often, or so it seems. 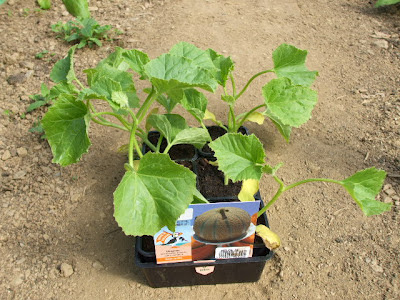 As I said earlier, melons are prone to dampening off due to water logging and a poor root system, I put mine in a pot buried in to the soil. This means that later on I can let the  soil in the pot slightly dry out and the roots will get moisture from the soil once they have grown through the bottom of the pot. I cut most of the base of the pot out and add some gravel before I fill the post with compost.

Like my cucumbers I grow the melons on the shoots, not on the stems, this gives more leaf area and a better crop. About 4 melons per plant at a time is enough for it to cope with, if you see the tiny melons turning yellow it's the plants way of telling you it has enough to cope with. 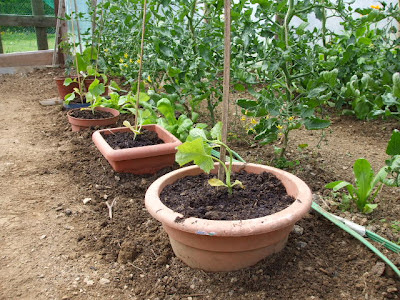