November 28, 2012
Like most people in northern Europe and the UK, we have had our fair share of rain this past couple of months. After the soil turning to dust in the summer it is now totally saturated, so there is not a lot you can do with it. I have added some compost and peat to my soil for enrichment and drainage, the only problem being is that nitrogen is easily washed out of the soil with all this rain, so it is a good idea to cover small sections and raised beds with plastic, which also helps keep the weeds down before you plant. 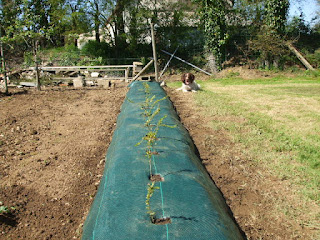 Another problem is the wind and I am adding some small hedges around my individual plots, these are all cutting so they will take a time to grow, but at least they were free and just might add a little protection.
Despite all this damp weather we have had a few dry days, so I have been slowly tidying up the garden ready for next spring. Last year I left it a bit late and had to much to do all at once when the weather improved. Also a day of fresh air in the garden will do me good, plus it is far better than sitting in front of the PC all day working on my business websites. 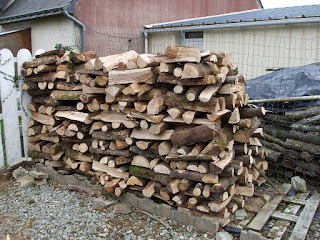 We received a  letter the other week from the local 'Marie', they informed us that we had a lot of trees overhanging a small lane that runs along the bottom of our fields. As this is about 300 metres long there are a fair number of tree to remove or cut off the over hanging branches. They are also surrounded by brambles, so it is not an easy task. On the plus side I will have a few years supply of logs, so as the French say I will get heat 3 times from the trees. Firstly when I chop them down, secondly when I transport them and stack them, thirdly when I eventually burn them.

The poly-tunnel is surviving yet another winter, I have over wintered some peppers which I planted quite late from some seedlings that had gone stagnant in the spring. I eventually got them to grow after re-potting a few times, but this was near the end of the summer. They are now loaded with peppers and if we do not get any severe frost for a while, they should last till well after Christmas. I have dug out the old soil from the tomato beds and added some fresh soil and manure, so the worms will be doing their job over the winter. 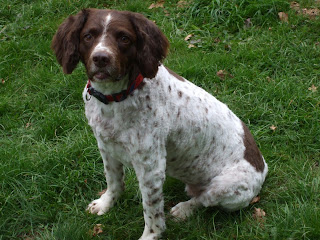 Bramble is now thirteen, so she is getting on in dog years. A while ago she could not get out of her bed and kept falling over. We took her to the vets and they said she had a back problem and an infection, she has been on pain killers and the infection is now clear, but she is not as sprightly as she once was and her back problem is to do with her age.She is still wonderful company and is always by my side, I think she will deserve a special present this Christmas, knowing her it will of course be something edible.