December 10, 2012
It's great to find new unusual tomato's to grow and I came across Litchi Tomato's or Morelle De Balbis  today, they look amazing, I will have to try and get some seeds.


The Morelle de Balbis, or Litchi tomato, has been grown as an ornamental curiosity in American gardens since the 19th century, but only recently has it gained attention as a novel-tasting food. Its dark red cherry-size berries, with the distinctive flavour of sour cherries and a hint of tomato, can be used in a wide variety of culinary applications — from fruit tarts, preserves, jams and sauces, to sorbets and wine. Plus, it’s easy to grow and frost resistant.

What Is a Litchi Tomato?

The Litchi tomato comes  from South America, where it has been an important part of indigenous cookery for hundreds of years. South Americans have developed a wide variety of local names for this plant, but it was the French botanist Michel Felix Dunal who first described the Litchi fruit scientifically, hence the common French name Morelle de Balbis (morelle is a French word for a nightshade plant; Balbis refers to the plant’s Spanish origin). Dunal gave it its first official name, Solanum balbisi, in 1813. Since then, the plant has been given a new botanical designation (S. sisymbriifolium), and has fascinated gardeners all over the world for its ornamental and culinary uses.

Because the plant itself is covered with thorns, it is sometimes used as a hedge plant to discourage animals from wandering into vegetable gardens. so if grown outdoors it could keep the cats out of the boarders.

The fruits ripen dark red and are round and somewhat bullet-shaped, tapering to a blunt point. The interior flesh is yellow and full of tiny flat seeds that are arranged much the same way as seeds in a cherry tomato. Thus, when eaten out of hand, the raw fruit has the mouth feeling of raspberries. The actual flavour is tart and refreshing, quite similar to a sour cherry, for which it can be used as a relatively good substitute in pies.

Because the plant is in the nightshade family, and a close relative of both the tomato and potato, its fluffy white flowers resemble potato or eggplant flowers, though they are more profuse and striking. The fruit forms inside a husk like a tomatillo or ground-cherry; then, as the fruit ripens, the husk bursts open. The fruit is ripe enough to eat when it can be removed easily from the stem; if you have to pull hard, it’s not ready.

The fruit droops in clusters from stout 3- to 4-foot-tall plants (some grow as tall as 5 feet) that can be caged like tomatoes for better support. The indented leaves look vaguely like tomato leaves, although side by side the differences are easy to recognize. The plants are covered with small thorns, even on the underside of the leaves. Some gardeners mind the thorniness of the stems and fruit husks and thus wear gloves to harvest the fruit, yet just as many people are not bothered by them at all. Keep in mind that the thorns help to protect the plant and fruit from predators.

Greta's Organic Seeds, but this was posted on 2010.
Baker Creek Heirloom seeds.

update on seeds 13. 12 .12
I have managed to find a US seed company that ships to France or the UK which is Bonanza.com
the site is a little like ebay and the seller was sanpedro. The seeds were £2.48 and 98p postage and apparently I will get 20 seeds and a chutney recipe, so good value.

This is their description
A highly decorative plant with formidable defenses, the Litchi tomato or Morelle De Balbis is rarely grown outside of South America, but thrives anywhere tomatoes can be grown. It is the same genus, but a different species. The calyx opens to reveal a seed-filled cherry red fruit which is very sweet when ripe. I have a recipe for a litchi chutney that is delicious and last year I made jelly from the fruit. The five foot plants are quite striking and the large white flowers are gorgeous. 75 days.

I have tracked down the seller which is J&L gardens in New Mexico and here is a direct link to their own on-line shop with hundreds of other seeds and a little about them.


'& L Gardens is home to over 350 varieties of  tomatoes and rare vegetables from our rich heritage of heirloom and open pollinated types. Our farm is in the fertile upper Rio Grande river valley near Espanola, New Mexico. In addition to tomatoes, we take melons and cucumbers, apples and other fruits , along with specialty potatoes and garlic to farmer's markets in Santa Fe and Los Alamos. All our garden vegetables and fruit are raised using traditional, natural methods.'

In praise of the Litchi Tomato
Love Apple Farm  They also sell the seeds.

It looks like they are a bush style plant, so they will not need de-shooting, and growing tips are most welcome. The thorns look pretty scary so I would wear gloves when tending these tomato plants.
This one is trained using the support system that is popular in the states, which seems a good idea and safer!. 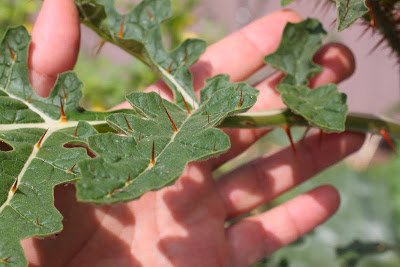 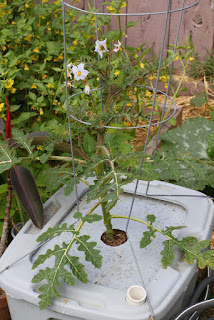 Apparently The flavour is hard to describe, and varies, depending upon the weather at time of harvest. The berries taste like a mix of cherry & gooseberry. The skin is very thin & tender. They are fairly seedy though.

So what a great challange for Mr TK for 2013, I just hope Father Christmas brings me some seeds.

Any comments about growing them or where to find seeds, would be most welcome.