February 01, 2013
Here are a few recipes and ideas of how you can use Litchi tomatoes which I have managed to find on various websites. Please email me if you have any that are not listed


The flavor of the ripe fruit. It's most similar to the sweeter types of cherry tomatoes (think Sungold), but it has hints of sour cherry and watermelon. Apparently the flavour improves and gets more fruity later in the season, as a result of the cooler weather so it seems.

The Litchi tomato combines the flavours of a sour cherry and a small tomato, lending a unique taste to recipes. Tomatoes can be roasted halved or whole, drizzled with olive oil and served with crusty bread. Another alternative is to cook the fruit, strain the seeds out and puree it to create a paste that can be added to recipes as a thickener and seasoning agent. Tasty chutney or salsa recipes can be prepared using the tomatoes in addition to other fruits or vegetables. Litchi tomatoes can also be substituted for cherry tomatoes or sour cherries in both savoury and sweet recipes, such as pies or tarts, sorbets or jams.
Source  Essortment 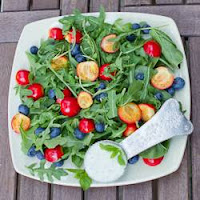 Litchi Tomatoes in a baby spinach, arugula and blueberry salad with a minty dressing.

Combine all ingredients in a deep pan and cook over medium-high heat for 20 minutes, or until thick. Remove from the heat and lift out the fruit mixture with a slotted spoon and put it into hot, sanitized preserve jars standing in hot water. Reduce the remaining syrup over high heat until thick like honey, and then pour this over the hot fruit and seal. Allow to mellow two weeks before using. Yields approximately four 12-ounce jars.
Litchi tomatoes
Location: Brittany, France