August 2013 in the Poly-Tunnel 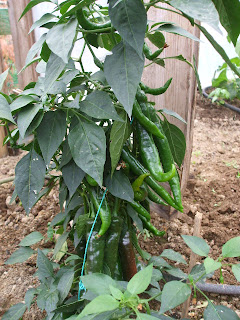 Despite a slightly later than normal start to the season because of the late frost, we will  probably have a better crop as the light levels get better the later you sow and plant. So for non commercial growers who are not looking for the best early prices on the market, a late crop can turn out to be a far better crop.

Judging by my peppers (sonar F1) and Hot peppers (Impala Cayenne F10  this certainly seems to be the case as the plants are producing bumber crops this year. Peppers are probably one of the easiest crops to grow in a poly-tunnel. They love the heat, have very few pests and disease problems and are very easy to care for with no de-shooting of de-leafing to do. Basically you just plant them into the soil, tie a few support strings and you can pinch out the top 4 or 5 growing tips later in the season to  help mature the last of the peppers before the end of the season. 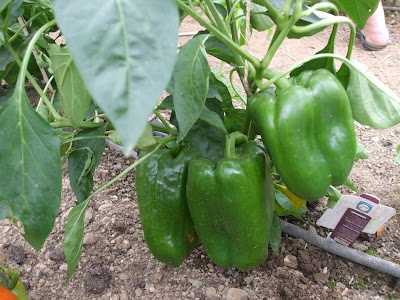 Our melons (Diego F1) have also been producing well and I do nip out the growing head at support wire height and grow the melons off of the shoots. Just save one melon and a couple of leaves per shoot,  4 to 5 shoots will be enough or the melons will turn yellow too early and die off. Tips on growing melons. 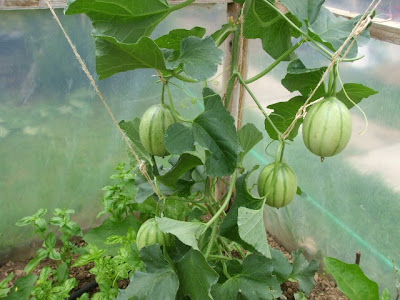 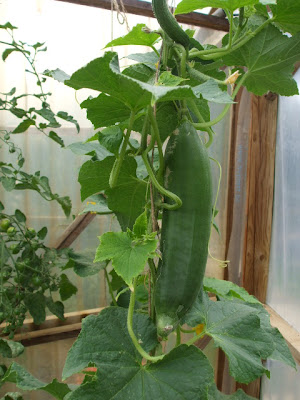 We have also had an abundance of cucumbers as per normal, I always plants at least 4 plants as you always get the odd one or two that die off half way through the season. This is usually cause by 'damping off' which is a type of root rot. I have managed to save the odd plant by covering the root ball and the bottom few inches of the plant with some slightly moist compost. This encourages new root growth and if your plant is not too overladen with fruit that it can make a comeback from it's slightly wilted looking state.

Cherry tomatoes are probably the easiest sort to grow, they seem to have less early setting problems, and will always produce a bumper crop. I also find there is less leaf area, so they do have better air circulation around the plants, which lessens the risk of some diseases. As you can see in the second picture I have trained these plants of strings over the paths and will continue to do so until late September until I nip out the growing tip. This variety is Sweet F1 hybrid cherry tomatoes. 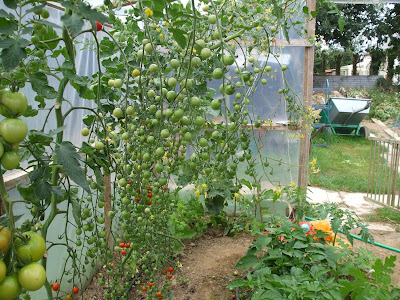 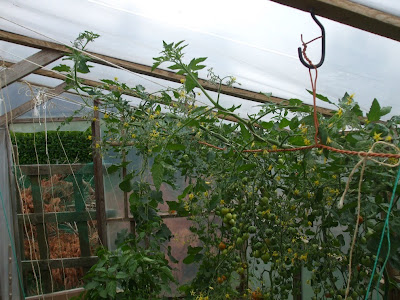 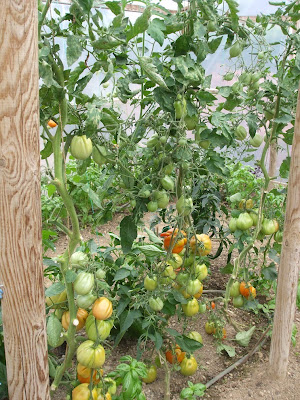 Coeur de Boeuf is the ideal partner for mozzarella and other soft cheese, drizzled with olive oil and seasoned with sea salt and pepper, which is why it is probably my favourite tomato. It is also great for stuffing and is always full of flavour. This seasons crop has been fantastic, so Mrs TK has been busy making plenty of her lovely tomato sauce, soups and other tasty dishes with all this excess fruit.

You can check out a few of her recipes on her blog.

After all my lecturing about the importance of feeding tomato plants, you will probably think that I religiously feed my plants at least once or twice a week. Well to be rally honest with you, I dug is lots of well rotted compost during the winter, we have horses so we do have a massive excess of compost. I then raked in some slow release fertilisers just before planting, then very early in the season, which is months ago I gave the plant s 2 or 3 liquid feeds, since then nothing. This goes to show that with good healthy soil you can feed a lot less. However, this will not work if you are growing in peat bags or pots as the nutrients will soon wash out with excess watering, especially the nitrogen.

The reason I have not feed as much this seasons is that I have been away from France quite a lot this summer, I did have staff shortage problems in my cycle shop in Guernsey, and luckily 6 weeks ago I handed it over to the new owners which was my long term plan.