August 18, 2013
Even though is was a little late in the season I did mange to eventually sow my Litchi tomato seed which had purchased from a Mexican website, which you can read about HERE. 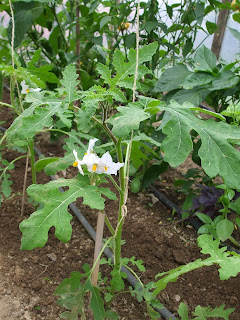 I had virtually given up on the seedlings as to be honest I have slightly neglected the poly-tunnel this season due to other commitments. However. a  few months or so ago I planted out the tiny seedlings into the soil and hoped they would spring into life as they were looking very weak and neglected still in the seedling tray.

I have been away for the past 6 weeks, but Mrs TK has done a great job looking after the poly-tunnel for me. I was pleasantly surprised with the Litchi tomatoes and how they had progressed.

The thorns on the plants are as dangerous as rose or cacti thorns, so a lot of care has to be taken when dealing with the plants. I think the plants are a bush type, so I will leave all the shoots on and hopefully we will be able to harvest some fruit before the end of the season. 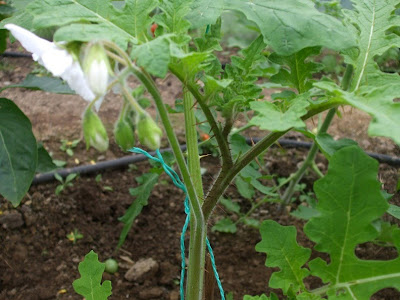 This is what we can expect to harvest, I have no idea what they taste like, but they certainly look different to any tomatoes that I have grown in the past. 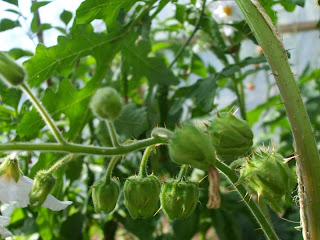 The Litchi tomato plants are now taking over the poly-tunnel, as traditionally they are an outdoor tomato crop needing a lot of space and they can also take quite low temperatures. However, as I had sown the seeds very late I thought the poly-tunnel would produce a crop before the end of the season. The fruits looked to have set OK and are on the main stem and the large shoots, which I have left on the plants. 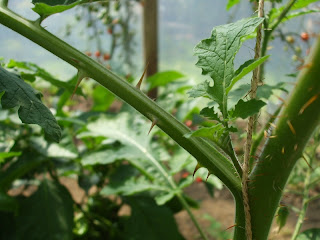 If you though rose bushes were dangerous then take a look at the thorns on these Litchi tomato plants. They are everywhere including the leaves on both sides, the fruits, all the stems and shoots, you definitely need gloves on when working with these plants. 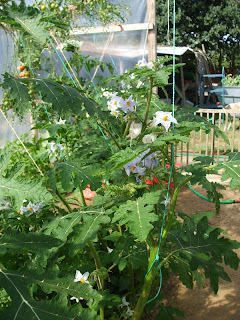 I have tried to tie in the shoots so as to give us room to walk past them, next season I will give them a  lot more room and grow most of the plants outdoors.