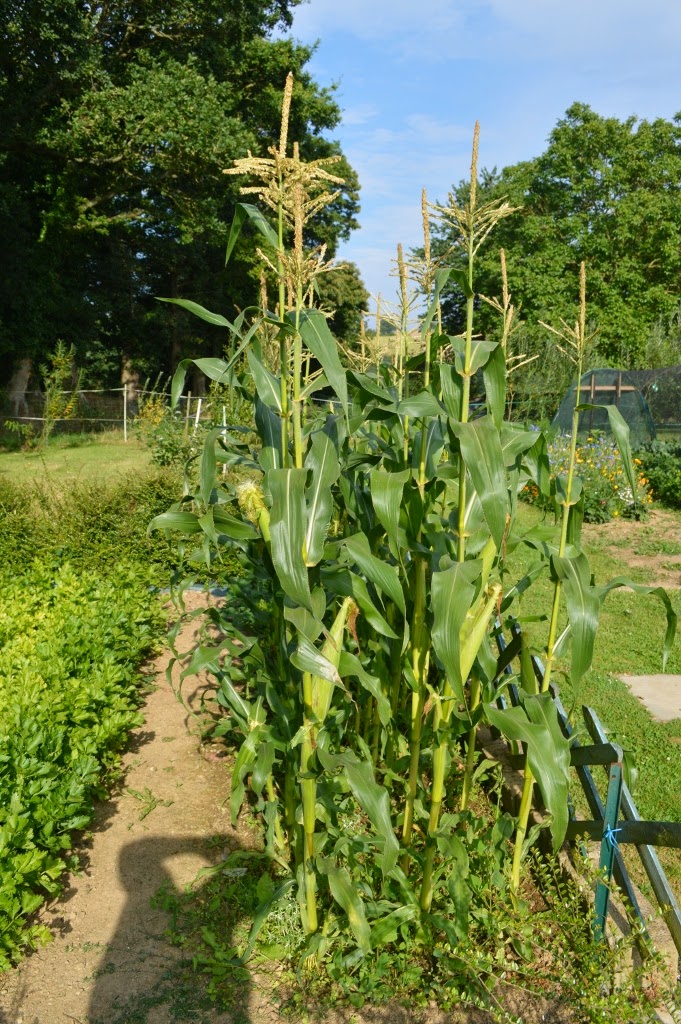 This seasons sweet-corns are best I have grown and it is probably due to two lots of rain at the right time, the first heavy downpour was just after they had been planted out so the plants got well established early on. We have not had a lot of rain for a while here in Brittany for a while, so I have been keeping them well watered with a can via the water butts.  it is hard work but I aim to get a good harvest of sweetcorn this year. I also raised my plants in the poly-tunnel giving them a better start that direct sown plants.

You cant beat the taste of fresh sweet-corn on the BBQ, I tend to blanch mine first then smear will butter before finishing off on the BBQ. Another method I have used is to wrap then uncooked in wet kitchen roll, then  tinfoil crimping it all around. Add extra water and a knob of butter at the top, before sealing the corn in it's own little foil oven. This can then be put on the BBQ to cook for about 20 to 30 mins. You can check it every so often and top up the water as it must not dry out. Pre-blanch slightly if you want to save on the cooking time 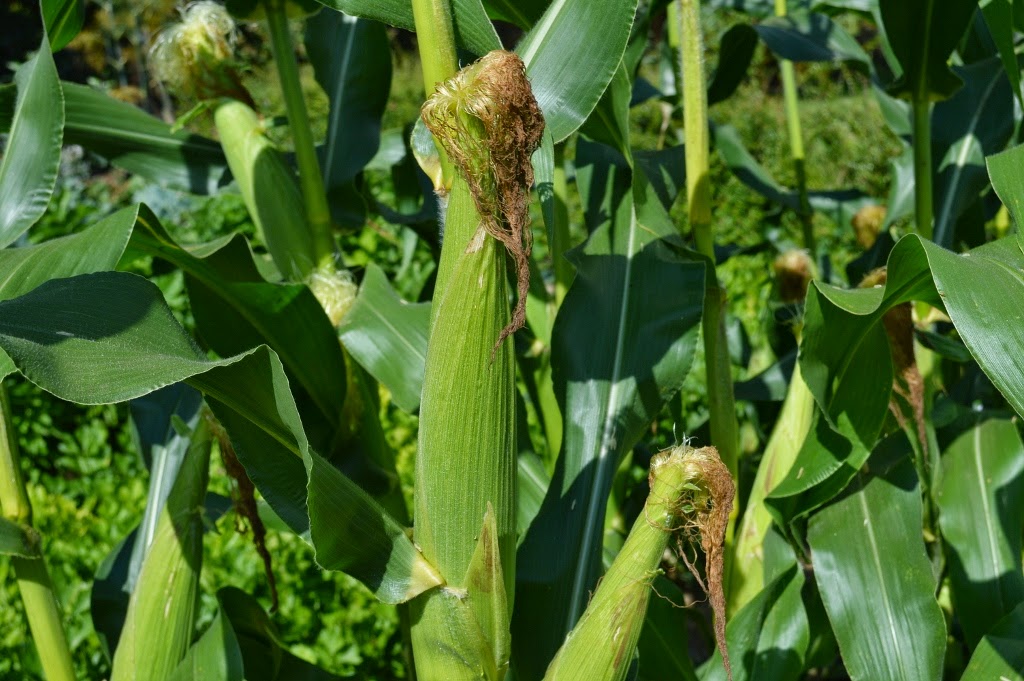 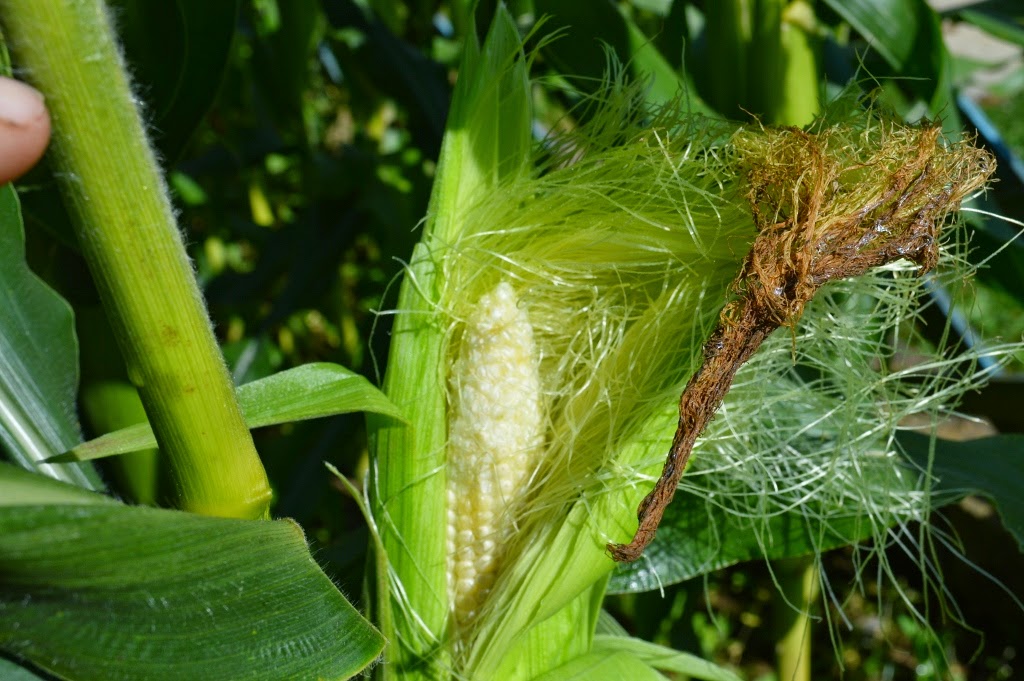 The time scale to test the corn is between 18 to 25 days after the first silk appeared, which is also when the silks change colour to dark brown or black.
The top photo shows the silks turning brown, however, upon peeling back the husks you can see that the kernels still have not formed at the top of the cob, so It will be a few weeks before I can harvest.

Sweet-corn it's at it's best as soon as it is harvested and is best stored in the fridge. The sugar in the kernels soon turns to starch after a few days, so the sooner you eat them the better they will taste. You can store them long term but freezing them, some people just remove the husks than wrap then in foil before freezing. A preferred method is to blanch them before freezing. Bring some water to the boil, add the corn and boil for 4 to 6 minutes, then drop into iced water. You can then either leave the corn whole or use a sharp knife and  remove the corn from the cob before bagging and freezing. 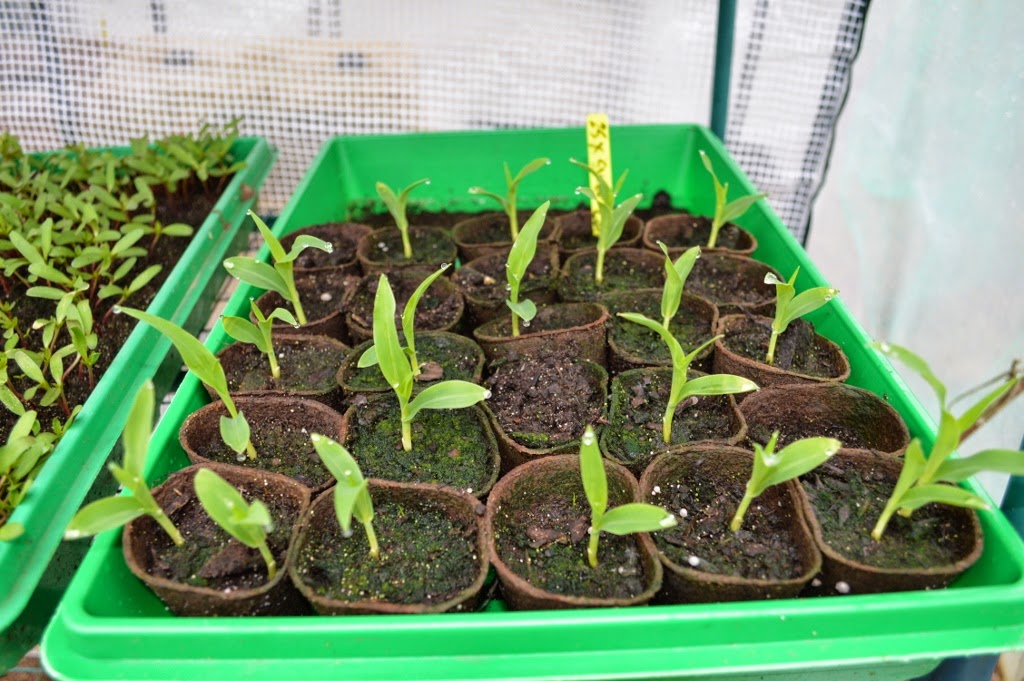 Tips on growing sweet-corn
I prefer to raise my plants under cover as they have quite a long growing season, so they get a better start then direct sown plants.

As sweet-corn plants are wind pollinated they should be grown in blocks rather than rows, 45cm (18in) apart. Grow them in a sheltered, sunny position, protected from strong wind, on any fertile garden soil.

Sweet-corn  does not really like heavy soil, so add plenty compost. you can also mulch the plant to preserve moisture and keep the weeds down, be very careful when hoeing around the plants as they have very shallow roots. You can stake very tall plants if the are prone to bending over in the wind and keep the plants well watered in hot weather especially  when the plants are just flowering early on.